'You are the most beautiful lady in my heart, mama': Beach Road slashing victim says son's words gave her strength

When Han Hongli's children got to know of the violent slashing incident their mother was involved in, they wanted to drop out of school to help pay for her hospital bills.

But Han would not hear of it.

Speaking to The Straits Times in an interview last Wednesday (June 29), the 42-year-old Chinese national detailed her thoughts during and following the attack at the steamboat restaurant she was working in.

Based on videos shared on social media, Han was assaulted by a knife-wielding man at the restaurant along Beach Road on April 14. According to Han, she had been working in the kitchen at the time.

Her estranged husband, Cheng Guoyuan, was charged with attempted murder on April 16, but Han's injuries as well as details of the attack cannot be reported as the case is due before the courts, said The Straits Times.

Han was discharged from the hospital on May 19 and is currently recuperating in the community, where volunteers help to bring her meals and accompany her for medical appointments.

The mother-of-two from Henan fought back tears as she recounted to The Straits Times how she angrily told her children off for wanting to quit school.

Her 19-year-daughter is in university in China while her 16-year-old son is in high school.

"I told them that they are the only hope I have left and the reason for me to continue living. If they were to quit school, what would my struggles have been for?" said Han, who came to work in Singapore in 2016.

Her children are currently living with her younger brother and his family in Henan. Han's 72-year-old father, her sole surviving parent, has not been told of the attack as Han is worried he would not be able to handle the shock.

'No matter what, you are the most beautiful lady in my heart, mama'

Han shared that after her children found out about the attack, she told them that she was worried that her injuries would scare them.

But her son responded, "No matter what, you are the most beautiful lady in my heart, mama".

His heart-warming words "gave her strength during a really difficult period", said Han.

Han told The Straits Times that she still hopes to continue working in Singapore to fund her children's education and give them a good life, and it is this thought that keeps her going.

According to Han's doctors, her progress has been better than expected. Han also shared how she would push herself in the recovery regime prescribed by doctors.

"My doctors told me to do hand exercises three times a day, but I try to do more, sometimes five to 10 times a day.

"I have to get better for my children's sake. They are my everything," said Han, who also hopes to be well enough to travel back to China to visit her family. She was last home in 2019, according to the report.

Read Also
'I couldn't just stand there and do nothing': Man who intervened in brutal Beach Road slashing 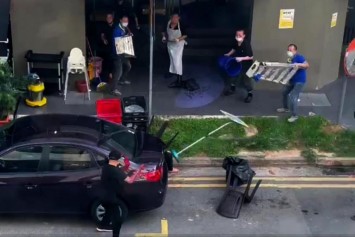 Han's brother also shared that her children are now working part-time jobs in an effort to help ease their mother's financial burden.

According to The Straits Times, charity platform Ray of Hope has so far raised $105,400 for her medical bills and caregiving needs following a fund-raising campaign in May.

To the donors, she told The Straits Times: "If it were possible, I want to thank every single person and give them a bow to show my gratitude."

She expressed the same deep appreciation for the people who jumped in to help fend off her attacker on that fateful day. "They saved my life," said Han, "I will personally thank them and bow to them".