People continued to use the Bishan and Sengkang bus interchanges when The Straits Times visited on Aug 15, 2021.

SINGAPORE - Infectious disease experts say there is little risk to commuters being infected with Covid-19 when passing through the Bishan and Sengkang bus interchanges, where new clusters were detected recently.

This is especially if they maintain measures such as proper mask wearing and strict hand hygiene, said Professor Teo Yik Ying, dean of the National University of Singapore's Saw Swee Hock School of Public Health, on Sunday (Aug 15).

The school's vice-dean of research, Associate Professor Alex Cook, said: "Unless you or a household member are still unvaccinated and in a high-risk group, then I would not hesitate to commute even if there are clusters in the journey."

The experts were responding to queries from The Straits Times after two of three new Covid-19 clusters announced on Saturday were linked to the interchanges.

The Land Transport Authority had earlier said 14 bus captains and two Sengkang bus interchange staff were among the cases in the clusters. They were detected through regular surveillance testing and none had severe symptoms.

While cautioning against speculating about the causes of the clusters, including the possibility of lapses in safe management measures, Prof Teo said it was entirely expected that co-workers may eat or have smoke breaks together.

"These are all reasonable expectations when people interact, so I do not think it is necessarily a cause of any lapses in safe management measures," he said.

He noted another cause of the cluster might be in common facilities such as toilets, adding that these had been identified as possible reasons for previous outbreaks in wet markets and food centres. 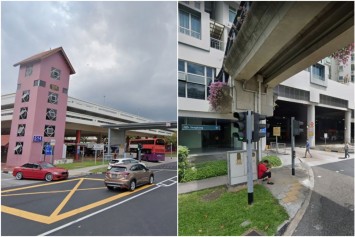 Professor Dale Fisher, a senior infectious diseases consultant at the National University Hospital, advised the public not to "overthink" their response to the new clusters and just comply with the prevailing measures.

"Getting the last few people in Singapore vaccinated is the best way people can help," he added.

People continued to use the Bishan and Sengkang bus interchanges when The Straits Times visited on Sunday.

Commuters stood in queues at the bus bays or waited on benches while observing safe distancing.

There was also a steady stream of people moving between the bus interchanges and the nearby shopping malls, Junction 8 and Compass One, as well as the adjoining MRT stations.

Some commuters told ST that they would use the bus interchanges only when necessary.

One of them, who identified himself as Henry and was at the Sengkang bus interchange with his five-year-old son, said they were taking extra precautions by using hand sanitiser.

The 38-year-old, who works in the IT industry and is vaccinated, had also instructed his son not to touch surfaces in the bus interchange unnecessarily.

Others said they were not worried about the clusters.

Mr Xavier Poh, who turns 21 this year, said he would continue to use the Sengkang bus interchange to get around.

"I am sure... all of us will do our part to prevent (new clusters) from happening," said the Ngee Ann Polytechnic student, who is vaccinated.