A handout photo. Frank James, a person of interest in the shooting that took place on the N train in Brooklyn, New York is shown in this handout photo provided by the New York City Police Department (NYPD) on April 12, 2022.

The man suspected of setting off smoke bombs and shooting 10 passengers on a New York City subway car was arrested on Wednesday (April 13) after a 30-hour manhunt and faces federal criminal charges.

The following are eight facts about the man:

* Frank Robert James, 62, was arrested on a Manhattan street and charged in federal court with an attack on mass transit. He could face life in prison if convicted, officials said.

* James has ties to New York, New Jersey, Pennsylvania, Wisconsin and Ohio with addresses in Wisconsin and Philadelphia, police said. His record includes nine prior arrests in New York and three in New Jersey, the New York Police Department said.

* James, born in the Bronx borough of New York City in 1959, has often moved city to city during his life, his sister told the New York Times. She also said that she and James last spoke years ago, when their younger sister died of a heart attack.

* The suspect left keys to a rented U-Haul van and a credit card with his name on it at the crime scene in the borough of Brooklyn. He rented the van in Philadelphia and parked it on a street near the 36th Street station where the shooting occurred, authorities said.

* The gunman fired 33 rounds from a Glock 9 mm semi-automatic handgun, which authorities say James purchased in 2011. 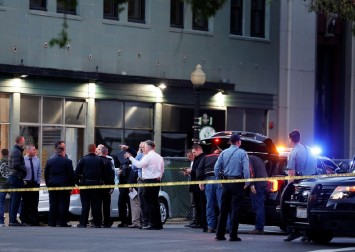 * The gun was later recovered along with three extended-ammunition magazines, a hatchet, some consumer-grade fireworks and a container of gasoline, police said.

* In June, a man by the name of Frank James purchased fireworks from Phantom Fireworks Showroom in Caledonia, the business located south of Milwaukee, Wisconsin, said in a statement. The exact combination of fireworks purchased there was found at the scene, the business founder told MSNBC.