Daniels, who says she had an affair with Trump in 2006, around the time that the reality television star's wife Melania had given birth to their son Barron, said she would dedicate the tell-all -- entitled "Full Disclosure" -- to her young daughter.

"You really didn't think I would hold anything back?" said Daniels on the ABC television show The View.

"I'm gonna write everything and include it and people can think what they want about me but at least it's the truth -- it's not like that they haven't been thinking that about me anyway," she said.

Daniels said the book, due to hit the shelves on October 2, would fill in details that were cut from her interview with the CBS show 60 Minutes earlier this year. 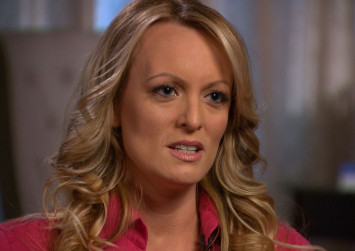 "Everybody knows that a lot of the 60 minutes (interview) was cut down for time," she said. "There are things that I said in my interview that I really wanted people to know, that were very important to me, that I didn't get to say."

She said she had been working on the book for about a decade, and it would recount details of her career in strip clubs and the pornographic movie industry.

She said that even though the book would be dedicated to her daughter, she would have to wait "until she is of a certain age" before allowing the girl to read it.

Trump has publicly denied the affair, although his personal lawyer Michael Cohen has pleaded guilty to campaign finance violations linked to hush money he paid Daniels through a front company.

The book is due out just over a month before the hotly contested midterms, and follows a slew of books that have revealed damning details about alleged chaos and in-fighting inside the Trump administration.

"It's going to be a long three weeks until the book comes out for Donald Trump," said Michael Avenatti, Daniel's lawyer, who appeared on the show with her.