Bloodied but alive after Russian air strike in western Ukraine

An injured serviceman is escorted by medical workers, following an attack on the Yavoriv military base, amid Russia's invasion of Ukraine, at a hospital in Novoyavorivsk, Ukraine, on March 13, 2022.

YAVORIV, Ukraine — The Ukrainian colonel's blast-damaged car limped back from the forest where he had just treated soldiers wounded in a Russian missile attack on a military base in the country's far western edge.

Leonid Benzalo, an officer in the Ukrainian medical reserve, told Reuters he was in a dormitory at the vast Yavoriv base, just 15 miles (25 km) from the Polish border, when air raid sirens woke him at 3.20am (0120 GMT).

The soldiers took shelter for two hours, some in the surrounding forest, and were returning to the dormitory when the missiles struck, he said.

"The dining room and dormitory were destroyed. So were the barracks," he told Reuters, speaking after his driver, who still had blood on his uniform, stopped to buy coffee at a gas station on the road to the regional capital Lviv.

The military training facility, the biggest in western Ukraine and a venue for past drills with Nato, houses the International Center for Peacekeeping and Security.

The blast ripped through the building, throwing Benzalo across the room, he added. He remembered six powerful explosions in total.

"The most important thing is we're still alive," he said.

Russia's Defence Ministry said that its attack had killed 180 "foreign mercenaries" and had destroyed a large cache of weapons supplied to Ukraine by other countries.

Reuters could not independently verify the casualties reported by either side, or the damage reported by Russia.

It was the most westerly air strike on Ukraine since Russia launched its attack on Feb 24, 2022 demonstrating its reach across Europe's second largest nation as it continued to bombard and besiege cities to the east.

At a hospital near the facility, Reuters saw at least eight wounded men being stretchered or wheeled into ambulances bound for Lviv. Some wore military uniform and appeared to have burns on their hands or faces.

Regional governor Maksym Kozytskyy appealed for specialist medical equipment to treat wounds. "If someone has an opportunity to help, please contact us," he said in a Facebook post.

Reuters could not immediately verify Russia's assertion that foreigners had been on the base at the time of the strike, or which countries they came from. 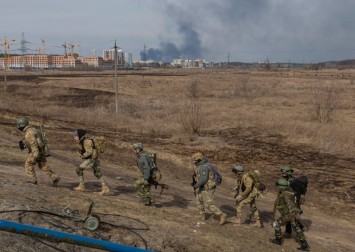 Ukrainian Defence Minister Oleksii Reznikov said in a tweet on Sunday about the strike that "foreign instructors work here" and that information about the victims was "being clarified". But it was not clear if he meant any foreigners were there on Sunday, and he did not specify any nationalities.

While Ukraine held most of its drills with Western countries at the base before the invasion, according to Ukrainian media all foreign instructors left in mid-February, leaving behind equipment.

While Western nations have sought to isolate Moscow by imposing harsh economic sanctions and have been supplying Ukraine with weapons, the United States and its allies are concerned to avoid Nato being drawn into the conflict.

A Ukrainian official told Reuters on March 3, 2022 that Yavoriv played a central role in absorbing foreign volunteer fighters into the Ukrainian army.

"They all end in Yavoriv, and from there they are distributed to the points of service," said Roman Shepelyak, head of the Department for International Technical Assistance and International Cooperation at Lviv Regional State Administration.

Shepelyak said foreign fighters came from many countries, including — on a day Reuters visited his office — Poland, Holland and Britain.

Some foreign volunteers have told Reuters they are joining Ukraine's fight against Russia as individuals rather than fighting under their country's flag.

The British government, for example, has urged its citizens not to join the fighting.