Border fear, and then relief, for men fleeing Russia

Travellers from Russia drive after crossing the border to Georgia at the at the Zemo Larsi/Verkhny Lars station, Georgia, on Sept 26, 2022.

ALMATY - For the men leaving Russia after vast journeys across the world's biggest country, there is now often a final ordeal: visceral fear at the border followed by a rush of relief for those who reach the other side.

Hundreds of thousands of men have left Russia since President Vladimir Putin invaded Ukraine on Feb 24. Some feared they would be called up to fight, others simply sought new lives after war changed Russia more dramatically than at any time since the 1991 collapse of the Soviet Union.

After Putin announced a partial mobilisation of reservists last month, Russia's first since World War Two, the trickle of emigres turned into a flood - and mundane border anxiety turned into fear for thousands of men who rushed to the exits.

Publisher Aidar Buribayev started thinking about leaving immediately after Putin announced the mobilisation on Sept 21. What finally convinced him was seeing Moscow, for centuries a crucible of raw, bustling energy, so subdued and deserted.

"The final straw was driving through Moscow and suddenly realising there were no traffic jams, and seeing my co-working office almost empty," Buribayev, the publisher of Russian online news outlet MediaLeaks.ru, told Reuters in Kazakhstan.

Thus began a 4,300 km (2,700 mile) odyssey out of Russia, a pivotal break with his homeland that is shaping the lives of entire generations of urban Russians and their families.

A direct flight to Kazakhstan, where he has relatives, was impossible due to high demand, so Buribayev flew to Kazan in southwest Russia and then thousands of kilometres east to Barnaul in the Altai region of Siberia.

From there, he took a bus to eastern Kazakhstan. All 50 people on the bus, he says, were men aged between 20-35.

"They were all from big cities and looked like stereotypical nerdy IT guys," Buribayev, 44, said.

Underscoring the complexity of the way the war is perceived in Russian society, patriotic villagers in the places they drove through made derogatory comments about them being draft dodgers.

"What struck me as a Muscovite was a large number of cars with Z and V symbols," Buribayev said, referring to the letters that have come to symbolise the Russian invasion after appearing on Russian military vehicles.

After numerous reports about men being questioned, detained and even turned back at border posts by Russian officials, tension mounted as they approached the border

"People were afraid of the border," Buribayev said. "But the fear then passed."

After crossing into Kazakhstan the men turned to their phones to update relatives that they had crossed successfully.

"The relief was momentary," he said because people on the bus immediately turned to the more basic problems of being foreigners in a strange land.

In dozens of interviews with Reuters, men told of the fear as they approached the border, some physically shaking when questioned by border guards about their reason for travel. 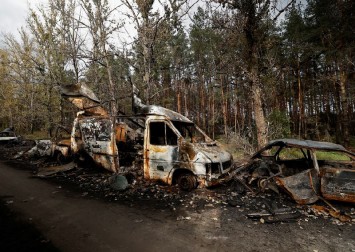 Some said they celebrated with a drink once making it to the other side, though the relief soon wore off as the challenges of life ahead sank in.

Kirill Ponomarev, who took a 10,000 km (6,000 mile) journey to Armenia, said he saw younger men questioned by officials about their travel as they sought to leave the country. Some didn't get on the flight they were booked on.

Ponomarev said there was no immediate relief on exiting Russia - just stress.

"It makes me feel sad and angry at the same time," he said of leaving his country, his friends and his career. "I had to let it go. I mean, it was actually taken away from me."

One Russian who asked for his name not to be used because of the potential danger if he returned, said his heart stopped when border guards took his passport and asked him to wait for additional checks.

Shivering with fear, he waited for 15 long minutes while they checked his documents.

"I nearly shat myself with fear," he told Reuters. "It was terrifying."

But he made it to the other side.