LOS ANGELES - At least one California high school student was injured superficially when a teacher accidentally discharged a gun in class during a firearms safety course, police said on Wednesday (Mar 14).

The incident, which occurred on Tuesday, happened the same day as a separate case in which a police officer assigned to a school in the state of Virginia accidentally fired his service weapon inside his office and was placed on administrative leave.

The massacre of 17 students and staff in Parkland, Florida, last month has ignited a nationwide debate over whether some teachers should be armed, with President Donald Trump and Education Secretary Betsy DeVos in favour.

Dennis Alexander, a teacher at Seaside High School in California's Monterey County and a reserve police officer, fired a semi-automatic handgun as it was pointed at the ceiling, police chief Abdul Pridgen said in a statement.

Pridgen said no one was hit by gunfire or seriously hurt and police registered one injury in the incident, although local media reported that three teenagers were struck by falling masonry.

"One student had an abrasion to his neck, a red mark. When the bullet stroked the ceiling some debris came down. We didn't confirm two others," Seaside police commander Judy Veloz told AFP.

"There was no panic in the school. The teacher has been put on administrative leave. We're still investigating, interviewing students. The school is open as usual."

Fermin Gonzales, the father of the 17-year-old boy to whom police were referring, told NBC affiliate KSBW Alexander had informed the class he was going to demonstrate how to disarm someone and was checking if the weapon was loaded.

"It's the craziest thing," said Gonzales, who added that bruising to his son's neck appeared to have been caused by a bullet fragment.

A spokeswoman for the Monterey Peninsula Unified School District said in a statement education officials and police began interviewing students immediately after the alarm was raised.

"It was determined that there was no immediate threat to students or staff, and school remained in session," she said.

She added that the district allows only authorised law enforcement or security personnel to possess weapons on school property or transport. Students would be offered counseling, she said.

Alexander, who also teaches math, has been placed on leave both as a teacher and in his position as a reserve officer for the Sand City Police Department. He could not immediately be reached for comment.

The Alexandria Police Department in Virginia meanwhile said it was investigating after an officer accidentally discharging his weapon at George Washington Middle School on Tuesday morning.

"At approximately 9:10 a.m., a School Resource Officer accidentally discharged his service weapon inside his office at the middle school," the police said in a statement.

"He immediately checked for potential injuries in the area. No one was injured. The officer then contacted his supervisor and school staff. All students and staff are safe and classes continued as normal."

The officer was placed on administrative leave pending the probe. 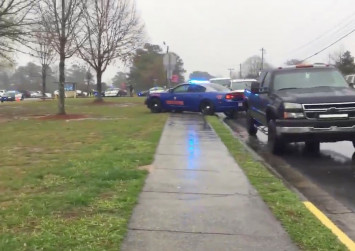 Students across the United States walked out of classes on Wednesday in a nationwide call for action against gun violence, many gathering outside the White House and chanting "Never again!" and "Enough is enough!"

Concealed carry at colleges and schools has been banned since 2015 in California and police are understood to be establishing whether Alexander violated any regulations by bringing a gun onto campus.

"I think a lot of questions on parents' minds are, why a teacher would be pointing a loaded firearm at the ceiling in front of students," Superintendent PK Diffenbaugh told CNN affiliate KSBW.

"Clearly in this incident protocols were not followed."