The Gun City store on the outskirts of Christchurch on March 18, 2019.

WELLINGTON - The owner of a New Zealand gun store said on Monday (March 18) that the man arrested in relation to the Christchurch shootings had bought weapons online from the store.

"All Gun City sales to this individual followed a police-verified online mail-order process."

Tightening New Zealand's gun laws is at the top of Prime Minister Jacinda Ardern's agenda as she meets her Cabinet on Monday for the first time since the mass shooting in Christchurch that killed dozens of Muslim worshippers.

The death toll from the massacre stands at 50, with another 50 people injured, after a gunman burst into a mosque and opened fire on worshippers with a semi-automatic rifle and high-capacity magazines, and then attacked a second mosque. 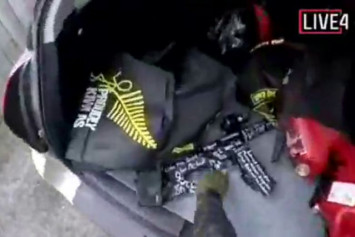 Australian Brenton Tarrant, 28, a suspected white supremacist, was charged with murder last Saturday. He was remanded without a plea and is due back in court on April 5 where police said he is likely to face more charges.

Ms Ardern was the first signatory of a national condolence book for the worst peacetime mass killing in New Zealand that she opened in the capital Wellington on Monday.

"On behalf of all New Zealanders, we grieve together. We are one. They are us," she wrote in the book.

The shock of the attacks has led to calls for an immediate tightening of laws to restrict access to some firearms, particularly semi-automatic weapons such as the AR-15 rifle used by the shooter in Christchurch.

"What the public rightly are asking right now is why is it and how is it that you are currently able to buy military style semi-automatic weapons in New Zealand, and that's the right question to ask," Ms Ardern told TVNZ earlier on Monday.