Alex Jones takes the witness stand to testify during the trial at Connecticut Superior Court on Sept 22.

NEW YORK – Conspiracy theorist Alex Jones ignited a courtroom shouting match on Thursday (Sept 22) railing against critics as he testified in a trial to determine how much he owes families of victims who died in the 2012 Sandy Hook Elementary School mass shooting, which he falsely claimed was a hoax.

Tensions boiled over after roughly four hours of testimony in the Waterbury, Connecticut courtroom, not far from Newtown, the town where the massacre took place.

Jones fulminated against "liberals" and refused to apologise to a packed gallery of victims' families.

"These are real people, do you know that Mr Jones?" a lawyer for the families, Mr Chris Mattei, asked.

"Just like all the Iraqis you liberals killed and love," retorted Jones, a Texas-based webcast host who is being sued because he said no one was killed at Sandy Hook and the families were merely actors.

Many of his followers then tormented and threatened the families.

The defamation trial concerns only how much Jones and the parent company of his Infowars site must pay in damages for spreading lies that the US government staged the killing of 20 children and six staff members as a pretext for seizing guns.

After jurors left for the day, Judge Barbara Bellis told the attorneys that she would enforce a "zero tolerance" policy for disruptions and would hold contempt-of-court hearings for anyone who "steps out of line", including Jones.

Jones also tested the judge's patience after Mr Mattei played a video clip in which he praised his followers for placing Infowars stickers around the Connecticut courthouse. 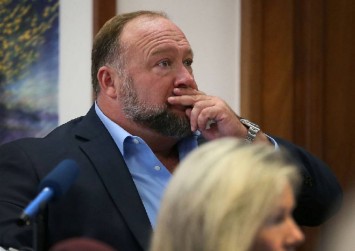 "Conservatives put up stickers and we're bad, I know, we all need to go to prison," Jones said in a mocking tone on the witness stand, prompting the judge to briefly clear the courtroom and hold a discussion with attorneys.

Jones does not face any criminal charges.

The clip was played as Mr Mattei presented evidence that Jones' followers had harassed Sandy Hook families online and in person, including at memorials for victims.

Jones also acknowledged calling Ms Bellis a "tyrant" after Mr Mattei displayed an image posted on Infowars depicting Ms Bellis with red lasers shooting from her eyes. He said he was not responsible for the post.

Ms Bellis has largely barred discussion of politics and conspiracy theories at the trial.

Jones is also not permitted to dispute his liability for damages, after Ms Bellis issued a default judgement last year because he repeatedly failed to comply with court orders.

Jurors must decide only what Jones and Infowars' parent Free Speech Systems must pay the plaintiffs, who also include a Federal Bureau of Investigation agent, for the pain and suffering they say he caused.

A month ago, the conspiracy theorist was hit with a US$49.3 million (S$70 million) verdict in a similar case in Texas, where Free Speech Systems is based.

Jones' lawyers hope to void most of the payout, calling it excessive under Texas law.