US President Donald Trump blows out the candle on his birthday cake during a working lunch with Prime Minister Lee Hsien Loong at the Istana.

WASHINGTON - United States President Donald Trump turned 72 on Thursday (June 14), having returned to the fray of Washington politics after his gruelling trip to Singapore for the summit with North Korean leader Kim Jong Un.

Trump's health, both physical and mental, have been the subject of keen interest in America.

He underwent an official physical in January and then White House physician Ronny Jackson described his health as "excellent".

Read Also
Check out my ride: Trump shows off 'The Beast' to Kim 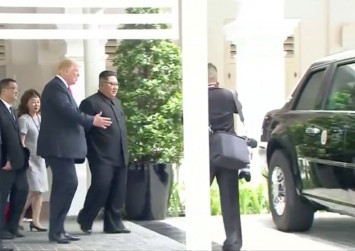 When Trump was still a presidential candidate, his then personal doctor Harold Bornstein released a letter on Trump's behalf in December 2015 in which he described the businessman's health in grand hyperbole.

It depicted Trump's blood pressure and laboratory results as "astonishingly excellent", his physical strength and stamina as "extraordinary", and said he would be "the healthiest individual ever elected to the presidency".

Bornstein said the "raid" took place on Feb 3, 2017, two days after The New York Times quoted the physician as saying he had prescribed Trump a hair growth medicine for years.

The oldest (and youngest) Asian leaders