CAIRO - Egyptian police killed 40 "terrorists" in separate raids early on Saturday (Dec 29), a day after a roadside bomb near the Giza pyramids killed three Vietnamese tourists and their guide, the Interior Ministry said.

Two raids in the Giza governorate killed 30 "terrorists", while the remaining 10 were killed in the restive North Sinai, the ministry said in a statement.

It said the authorities acted after receiving information the suspects were preparing a series of attacks against state and tourist institutions and churches.

"Information was received by the national security that a group of terrorists were planning to carry out a series of aggressive attacks targeting state institutions, particularly economic ones, as well as tourism, armed forces, police and Christian places of worship," the statement said.

Police acting upon this information carried out simultaneous raids in the Giza governorate and in North Sinai, killing a total of 40 "terrorists", it said.

In Giza itself, two raids were carried out, the first killing 14 suspects and the second 16 suspects, while the rest were in the North Sinai capital El-Arish.

Police also found a large number of weapons and ammunition as well as bomb-making materials, the statement said. 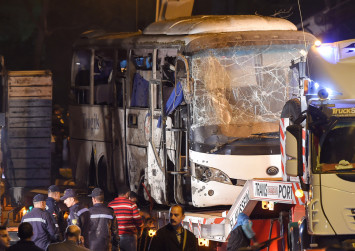 A statement by the public prosecutor's office said 11 other tourists from Vietnam and an Egyptian bus driver were wounded when the bomb exploded.

The improvised explosive device was placed near a wall along Mariyutiya Street in Al-Haram district near the Giza pyramids plateau, it said. There was no immediate claim of responsibility.

Egypt's vital tourism industry has been struggling to recover from terror attacks and domestic instability that have hit the country in recent years.

Militants linked to the terror group Islamic State in Iraq and Syria (ISIS) have claimed responsibility for previous attacks, including against Egypt's Coptic Christian minority who make up about 10 per cent of the country's population.

The Egyptian military launched a large-scale operation dubbed "Sinai 2018" in February to rid the Sinai Peninsula of ISIS militants after an attack on a mosque in the north of the peninsula killed more than 300 people.

Since the start of the campaign, 450 militants were presumed to have been killed "in the north and the centre of Sinai by (soldiers) and police", army spokesman Tamer al-Rifai told AFP. According to army figures, around 30 soldiers have been killed in the operation.