Ukrainian border guard cynologist Alina Panina, captured during the Azovstal steelworks siege in Mariupol in May and released in the recent POW exchange, speaks with Reuters, as Russia's attack on Ukraine continues on Oct 25.

KYIV – Alina Panina, a Ukrainian prisoner of war freed last week, recalls women fainting from hunger as they took the 15 minutes of permitted daily exercise during their months-long detention by Russian forces.

Panina, 25, was one of 218 detainees, nearly half of them women, freed on Oct 17 in one of the biggest prisoner swaps since Russia invaded Ukraine on Feb 24.

"Some of us would faint because we didn't have enough to eat ... The sugar level, the glucose, fell because there was not enough food," she told Reuters, adding that some 27 women had been forced to share a room intended for only six.

The one saving grace was that the women were allowed flour by their captors to bake bread, she said.

"When we didn't have bread, it was very difficult," said Panina, adding that the women had also been forced during their imprisonment to drink non-potable water.

When the invasion started, Panina had been working in the port of Mariupol in southeast Ukraine, checking ships for contraband.

She later helped defend a factory in the city during a months-long siege and heavy bombardment by Russian forces who finally took Mariupol, reduced largely to rubble, in mid-May.

'No one lost faith'

Her former commander, Valeriy Padytel, a colonel in the border guards in the Donetsk region, also complained of hunger and general maltreatment during the four months he spent in Russian captivity. He was freed in a prisoner swap in September.

"They didn't treat us like humans," he told Reuters, citing poor nutrition and medical treatment.

"We were given just 30 seconds to eat meals. Whether you managed or not didn't matter, it was your problem," he said, recalling how he and his comrades just wolfed down their rations to stave off the hunger.

Russia denies maltreatment of POWs. It says its actions in Ukraine are a "special military operation" to protect Russian security interests.

Panina said not all their captors behaved badly towards the detainees. 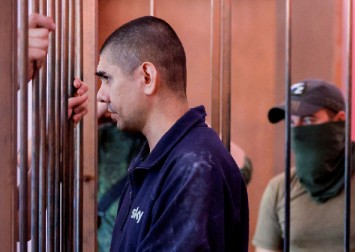 "There were those who treated us like humans, they understood us and sympathised with us. I can't say that everyone was bad and maltreated us. It depended on the person," she said.

Both Panina and Padytel, who wore black sweatshirts with the words "I'm Ukrainian", said the camaraderie among the detainees had helped them survive their ordeal.

"We tried to support each other, to cheer each other up, to give each other fighting spirit. When we saw the boys, they told us: 'God, how great it is to see our girls, even if they're in jail. It makes things so much easier for us'," she recalled.

Padytel said the Russians had believed their captives would agree after some time in detention to defect to Moscow's side.

"Not a single one of us did that. No one lost their spirit, no one lost faith," he said.