This undated handout combo photo obtained April 17, 2019, courtesy of the Jefferson County Sheriff's Office, shows 18 year-old suspect Sol Pais, who allegedly made threats against schools in the Denver metro area on April 16, 2019. She was found dead of an apparent self-inflicted gunshot wound on Wednesday (April 17).

NEW YORK - The Florida teenager whose purported fascination with the 1999 Columbine school massacre sparked a massive hunt for her this week appears to have kept an online journal peppered with violent imagery and awash in despair, anger and suicidal thoughts.

An online journal written by someone who identified herself as "Sol Pais" - the teenager who the authorities said was found dead on Wednesday (April 17) - included entries that alluded to "plans" that would lead to the author's death, though they did not describe specific threats against others.

Law enforcement has not confirmed Pais is the author of the journal.

"Being alive is f*****g overrated," one entry reads, above a drawing of a handgun going off, with the word "ready?" underneath.

"I wanna be dead so f*****g bad already," another page from last September reads.

Pais, 18, was found dead of an apparent self-inflicted gunshot wound on Wednesday, the authorities said, days after she travelled to Denver from her home in Florida and bought a shotgun ahead of Saturday's 20th anniversary of the Columbine High School shooting in Littleton, Colorado.

The authorities had described Pais as "extremely dangerous" and "infatuated" with the mass shooting, in which two students killed 12 classmates and a teacher. 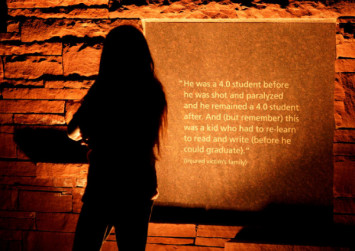 She made undisclosed threats, officials said, prompting numerous Denver-area schools to close on Wednesday as a precaution.

In an entry dated July 2018, the woman described a dream about her future plans.

"I was only a week away from the day, and I had my f*****g shotgun already, and I just remember the constant lies - to my family, friends, police, to teachers," she said in recounting the dream.

A drawing of what appears to be the barrel of a shotgun and a shotgun shell appears below the entry.

"One year is a long time for pain like this," she wrote in another 2018 entry. "I wish I could get a gun by the end of the summer."

A user on the National Gun Forum used the same screen name as the blog's author in a series of posts starting in late March, seeking advice on how an 18-year-old Florida resident could buy a shotgun in Colorado.

"I am planning a trip to Colorado in the next month or so and wanna buy a shotgun while I'm there and I was wondering what restrictions apply for me?" the first post read.

Pais lived in Surfside, Florida, where her parents reported her missing on Monday. That day, she flew to Denver, according to the authorities, and purchased a shotgun and ammunition legally at a store in Littleton, not far from Columbine.

A man who identified himself as Pais' father told the Miami Herald on Tuesday that he had lost contact with Pais.

"I think maybe she's got a mental problem," he said, the newspaper reported.

"I think she's gonna be okay."

Classmates at Miami Beach Senior High School, where Pais was a student, described her as smart and unassuming, if somewhat socially awkward, the newspaper reported.