The International Rugby League (IRL) said in a statement on Tuesday (June 21) that it needed to further consult before finalising its transgender policy.

"Until further research is completed to enable the IRL to implement a formal transgender inclusion policy, male-to-female (trans women) players are unable to play in sanctioned women's international rugby league matches," it said.

"It is the IRL's responsibility to balance the individual's right to participate... against perceived risk to other participants, and to ensure all are given a fair hearing."

The ban, which comes after Fina voted on Sunday to restrict transgender athletes in elite women's swimming, drew scathing criticism from transgender advocates.

"Blanket bans on women who are trans playing against other women risks violating international human rights principles of non-discrimination, which require such policies to start from a place of inclusion," Anna Brown, CEO of Equality Australia, said in a statement.

"Fina failed to meet that standard, and the Rugby League's ban also fails to do so, despite it being temporary."

The International Olympic Committee, however, said in November that no athlete should be excluded from competition on the grounds of a perceived unfair advantage, while leaving it up to sports federations to decide.

The International Cycling Union said last week it had tightened its eligibility rules while other sports have said they are reviewing their policies.

World football governing body Fifa said it is in a consultation process over transgender participation while World Athletics boss Sebastian Coe praised Fina for its stance.

A top medical official at Fina told Reuters on Monday he hoped other sports would follow the organisation's lead.

"To my mind, Fina's approach to this was very enlightened, it was very balanced, it was informed," Fina's Sports Medicine Committee vice chairman David Gerrard said.

However, US football player Megan Rapinoe, a two-time World Cup winner and an Olympic gold medallist, said the Fina decision was "disgusting" and "cruel". 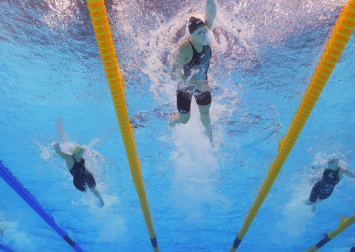 "We're (framing) everything through 'God forbid a trans person be successful in sports'. Get a grip on reality and take a step back," she told Time magazine.

The IRL said it would work with the eight nations competing at the women's Rugby League World Cup hosted by England in November to obtain data to inform a transgender policy in 2023.

"The IRL will continue to work towards developing a set of criteria, based on best possible evidence, which fairly balance the individual's right to play with the safety of all participants," the organisation added.

The ban is unlikely to affect many international players in women's rugby league.

There are no transgender players competing at international level in the sport's heavyweight nations Australia and New Zealand.

The governing body of Australia's domestic National Rugby League (NRL) competition declined to comment on the international ban and said it was still formulating its own transgender policy.

"The policy will be determined by the (NRL) Commission after all advice is carefully and sensibly considered," an NRL spokesperson said.