A sign reading "Maduro, illegitimate, dictator get out!" is held in a protest by Venezuelans outside their embassy in Guatemala City in support of opposition leader Juan Guaido's self-proclamation as acting president of Venezuela, on January 23, 2019.

However, Mexico - once a vocal member of the Lima Group regional bloc created to pressure Maduro to enact democratic reforms - struck a discordant note under new leftist President Andres Manuel Lopez Obrador, saying it would not take sides and branding support for Guaido a violation of sovereignty.

The telegenic Guaido declared himself Venezuela's temporary president on Wednesday at a rally that drew hundreds of thousands of Venezuelans. He accused Maduro of usurping power and promised to create a transitional government.

The diplomatic support for Guaido was a striking move in a region where countries tend to refrain from criticising each other despite their political differences, underscoring how rattled Venezuela's neighbours have become by its deteriorating situation.

Criticism of Maduro has grown in recent years as his government has sidelined the National Assembly, held widely-questioned elections and overseen an economic crisis that has forced millions of Venezuelans to flee, mostly to other South American countries. 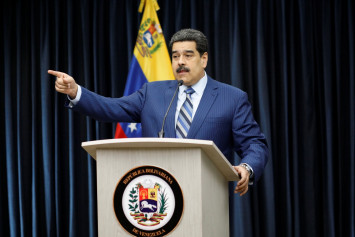 At the same time, right-leaning governments in South America have risen to power in places where Maduro once had allies.

"Argentina will support all efforts toward rebuilding democracy in Venezuela and reestablishing conditions of life worthy of all its citizens," Argentine President Mauricio Macri said on Twitter on Wednesday.

Maduro called on the military to stay united and severed diplomatic relations with Washington, which he accused of trying to orchestrate a coup with help from its allies in the region.

US President Donald Trump reiterated that "all options are on the table" and his administration signaled potential new sanctions against Venezuela's vital oil sector.

Mexico said it would still recognise Maduro as Venezuela's legitimate president and called for dialogue.

"Mexico does not form part (of) this attempt to take sides and promote a type of internal intervention," presidential spokesman Jesus Ramirez said in a broadcast interview.

Under Lopez Obrador, Mexico has returned to its traditional foreign policy of non-intervention.

"We maintain our position of neutrality and non-intervention toward the conflict in Venezuela," Ramirez said.