WASHINGTON - US President Donald Trump ordered his personal attorney to make threats for him about 500 times over the last 10 years, former lawyer Michael Cohen told lawmakers on Wednesday (Feb 27).

During testimony before the US House of Representatives' Oversight Committee, Trump's longtime "fixer" described a boss who was "intoxicating" but also deeply flawed, a "conman" who lied without hesitation.

Cohen lamented his "misplaced loyalty" to Trump and said he was ashamed of "concealing Mr Trump's illicit acts."

"How many times did Mr. Trump order you to threaten an individual or entity on his behalf?" Democratic US Representative Jackie Speier asked him.

"Quite a few times," Cohen responded.

"Probably," Cohen replied, saying the threats sometimes involved litigation or "an argument with a nasty reporter that is writing an article."

Cohen provided the committee with copies of letters he wrote at Mr Trump's behest threatening his high school and colleges not to release his grades or test scores.

"We will hold your institution liable to the fullest extent of the law including damages and criminality," Cohen wrote in a letter to Fordham University.

The panel's top Republican, US Representative Jim Jordan, read from a profanity-laced threat of legal action made by Cohen to a Daily Beast reporter in 2015.

Cohen acknowledged he made the comments to protect Trump from a negative story. 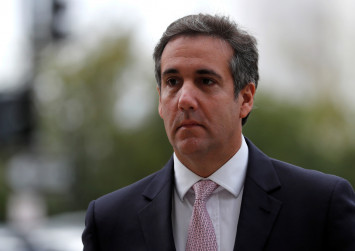 "So he paid off someone about a love child that doesn't exist?" Speier asked, referring to one such story.

American Media said Pecker met with Cohen and at least one other member of Trump's presidential campaign in August 2015 and offered to help with negative stories about Trump's relationships with women by buying the rights to those stories, according to a deal made public in December by federal prosecutors in New York.

Cohen acknowledged lying for Trump and expressed remorse in particular about heeding Trump's demand that Cohen lie to his wife about hush money payments to an adult film star.

"Lying to the first lady is one of my biggest regrets," he said.