An indictment unsealed in New York on Monday detailed corruption allegations around the 2010 vote for 2018 and 2022 World Cups.

Two former executives with US media giant Fox were charged with corruption, bank fraud and money-laundering on Monday as US federal prosecutors shed fresh light on the scandal-tainted bidding war for the 2018 and 2022 World Cups.

The three men are accused of paying millions in bribes to officials from CONMEBOL and CONCACAF, the governing bodies for football in South America and North America, Central America and the Caribbean.

The charges allege the bribes were paid in exchange for lucrative television rights contracts for regional competitions, the Copa America and qualifying games for the 2018 and 2022 World Cups.

The case forms part of the wide-ranging 2015 corruption scandal that left world governing body FIFA in turmoil and led to the downfall of president Sepp Blatter.

An unsealed superseding indictment released on Monday also detailed corruption surrounding the 2010 vote in Zurich which saw FIFA award the 2018 World Cup to Russia and the 2022 World Cup to Qatar.

The indictment said former Brazilian FIFA member Ricardo Teixeira and late Paraguayan official Nicolas Leoz, both members of the FIFA committee which voted on the 2018 and 2022 tournaments, received payment of bribes in exchange for voting for Qatar's bid.

Salguero pleaded guilty to multiple corruption charges in 2016 and was banned from FIFA while Warner, who faces charges in the United States, is currently battling extradition to the US from his native Trinidad.

"The profiteering and bribery in international football have been deep-seated and commonly known practices for decades," William F. Sweeney Jr, the assistant director in charge of the FBI's New York field office, said in a statement on Monday which announced the charges against Lopez, Martinez and Romy. 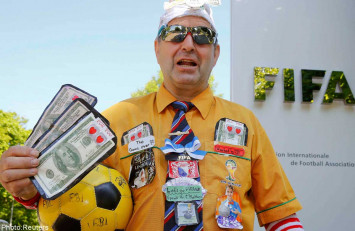 "Over a period of many years, the defendants and their co-conspirators corrupted the governance and business of international football with bribes and kickbacks, and engaged in criminal fraudulent schemes that caused significant harm to the sport of football.

"Their schemes included the use of shell companies, sham consulting contracts and other concealment methods to disguise the bribes and kickback payments and make them appear legitimate."

Since the FIFA scandal erupted in 2015, the US government has accused a total of 45 people and various sports companies of more than 90 crimes and of paying or accepting more than $200 million in bribes.

Of the 45 accused, five have died. A total of 22 pleaded guilty, of which only six have been sentenced to date.

A dozen remain in their home countries, where they face prosecution by local authorities or are free fighting extradition.