PARIS - Paris has banned more than half of the cars registered in the region from its roads as a record heatwave worsens air pollution, the most drastic restrictions ever imposed there, officials said.

The ban on older and less efficient cars was imposed on Wednesday and is due to stay in place within the A86 second ring-road - which encompasses Paris and 79 towns around it - as long as the hot weather lasts, the city council said.

Data firm AAA Data said that nearly five million vehicles registered in the Ile-de-France area around Paris were covered, about 60 per cent of total, a record number to be restricted. The city was not immediately available to comment on those estimates.

Traffic was lighter in Paris, but not significantly so. Several drivers said they were ignoring the restrictions as the fines for breaking them - just 68 euros (S$105) for cars and 135 euros for vans - were so low.

French authorities also stepped up restrictions on water use on Thursday as swathes of western Europe remained in the grip of an intense heatwave. 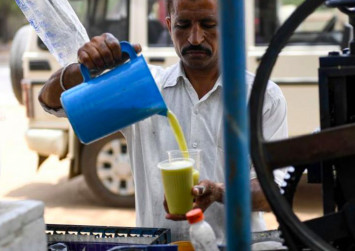 Paris' driving ban was imposed under the new 'Crit'Air' coloured stickers system, which classifies cars by age and pollution levels.

Only electric or hydrogen vehicles, petrol cars registered after Jan. 2006 and diesel cars registered from Jan. 2011 - corresponding to Crit'Air levels 1 and 2 out of 5 - were allowed on the roads.

Car owner lobbies decried the ban, saying it is not efficient to reduce pollution.

"There is a kind of hysteria about pollution. It is a bit over the top," said motorist federation FFAC's Julian Constantini.

Paris is set to tighten regulations further from July 1, when cars with level 4 stickers - cars with diesel engines registered between 2001 and 2005 and trucks from 2006 to 2009 - will be banned permanently within the A86 ring-road area.

Trucks and cars with Crit'Air 5 registration (1997-2000-registered diesels), as well as cars without a sticker have been banned from central Paris since July 2017.

The city council plans to continually tighten regulations until 2030, when only electric or hydrogen-fueled cars will be allowed on Greater Paris roads.