WASHINGTON - Prosecutors in Maryland and Washington announced on Tuesday (Dec 4) subpoenas for the records of 13 private businesses owned by Mr Donald Trump as part of an investigation into whether the US President is illegally benefiting from his Washington hotel.

The investigation focuses on the Trump International Hotel just four blocks away from the White House, which has become popular with foreign dignitaries and businessmen seeking to gain favour with the Trump administration.

The Maryland and Washington attorneys-general also issued subpoenas to five federal agencies for records related to the Trump hotel, which occupies the stately Old Post Office Pavilion on Pennsylvania Avenue and is owned by the federal government.

Mr Trump's victory in the presidential election in November 2016 immediately made the five-star hotel a hub for Washington politics, with various governments and embassies hosting receptions there. 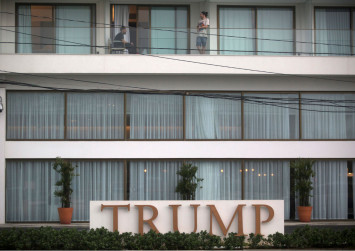 According to the Washington Post, the Saudi government spent more than US$270,000 (S$369,000) on rooms and other facilities in the hotel.

In June 2017, Washington and Maryland filed suit, saying Mr Trump was violating the emoluments clause of the US Constitution, which prohibits US government officials from receiving gifts, payments or other valuable benefits from foreign governments and foreign officials.

The lawsuit seeks "to make certain that (Mr Trump) faithfully serves the American people, free from compromising financial entanglements with foreign and domestic governments and officials", the suit said.

Behind the suit were complaints that the hotel and its restaurants have - because of the link with the US President - unfairly siphoned off business from local Washington and Maryland businesses, including convention centres in Washington and nearby Baltimore.

The first complaints were made shortly after Mr Trump became President. On Monday, a judge turned away objections by the US Justice Department, which argued that there was no basis for the case.

Mr Trump stepped away from involvement in his real estate business, The Trump Organisation, when he became President, leaving management in the hands of his two sons.

To skirt controversy over the hotel, Mr Trump announced early on that profits from the Washington hotel and others derived from foreign customers would be donated to the US Treasury.

In March, they announced a donation of US$151,470 for 2017, but did not detail how that figure was determined.