A man plays with a giant marble maze during the annual New York Toy Fair, at the Jacob K. Javits Convention Center on February 16, 2019.

The Toy Association, president & CEO, Steve Pasierb said, "They're going to take it to the next level, try to keep it fresh with new ways, new play patterns, to include packaging with the collectible. You're going to continue to see blind packs be hot. But, I think this, is really going to be the big year of entertainment and licensing once again."

Lego promoted sets for the upcoming Toy Story 4 movie and celebrated the 20th anniversary of its Star Wars line.

But the company also gave a push to a new play. 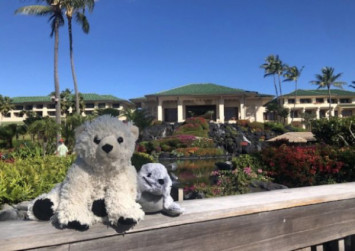 "And this is the first time that we're introducing a way for kids to play in a new way, with one hand in two different worlds. So, as they manipulate the Lego set, it will have an impact on the digital game that's happening on their mobile phone app."

Hasbro gave a lift to Monopoly, which now comes with things like blind bags and in a version for millenials. It also showcased Play-Doh and good old Nerf guns.

Hasbro's president, Jonathan Berkowitz said, "The hottest trends this year are really things that bring people together and connect people in new and different ways. So, our games business does that. It's a very social business."

"So, our Nerf business is really about active play and getting kids and families outside, and also Play-Doh is about creative play, which is another big trend right now, and giving kids freedom to play and express themselves."

The toy industry is coming out of a hole created by the Toys'R'Us bankruptcy last year.

Market researcher, the NPD Group, estimated that US customers spent about $22 billion  on toys last year. That is half the amount from the year before.