UNITED STATES - A partial US government shutdown may be this year's Christmas gift for Americans, as the White House on Sunday (Dec 16) appeared no closer to reaching a government budget deal.

The Trump administration has continued to insist that Congress include US$5 billion (S$7 billion) for a border wall between the United States and Mexico. If no budget deal is reached by Friday (Dec 21), some federal agencies will begin to close.

Said White House senior adviser Stephen Miller: "We're going to do whatever is necessary to build a border wall to stop this ongoing crisis of illegal immigration."

Mr Miller defended US President Donald Trump's key campaign promise to build the wall on CBS's Face The Nation programme, and said Democrats opposing the US$5 billion price tag must "decide whether they want to fight for America's working class, or promote illegal immigration".

But Republican Senator John Barrasso remains optimistic that both parties will reach a deal.

"The House and the Senate are trying to come up with a proposal that would get passed in both of those bodies before Friday... which I hope the President would then choose to sign," said Senator Barrasso.

President Trump said last week that he would take responsibility for a potential shutdown, in a rancorous public meeting with Democratic congressional leaders Nancy Pelosi and Chuck Schumer. 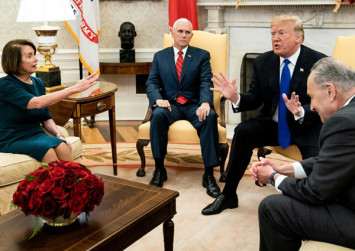 She added: "They are playing games with members of Congress - they take the leaders of Congress into the White House and create a media circus instead of just sitting down and negotiating. Do I think we can avoid a shutdown? Of course I do. Because there's people on both sides of the aisle who want to find common ground."

One solution would be a temporary stop-gap measure that provides government funding through January.

Another would be for Mr Trump to settle for the roughly US$1.4 billion that's currently allocated for border fencing, which may be unlikely if Mr Trump sees the spending bill as his last chance to get his way before Democrats take over the House of Representatives in January.