Trump complains he is being blamed for New Zealand attack

US President Donald Trump appeared to be referring to criticism of his response to the attack, which was allegedly carried out by a 28-year-old white supremacist claiming to be resisting genocide against white people.

WASHINGTON - US President Donald Trump waded Monday (March 18) into the controversy over his response to the massacre of 50 people in two New Zealand mosques, complaining that he was being blamed for the tragedy.

"The Fake News Media is working overtime to blame me for the horrible attack in New Zealand," Trump told his more than 59 million followers on Twitter.

"They will have to work very hard to prove that one," he tweeted. "So Ridiculous!"

Trump appeared to be referring to criticism of his response to the attack, which was allegedly carried out by a 28-year-old white supremacist claiming to be resisting genocide against white people.

In a lengthy written rant, the alleged killer referred to Trump as "a symbol of renewed white identity". Trump did on several occasions tweet and speak to condemn the "horrible" attack and offer any US assistance to New Zealand's authorities.

However, he courted controversy Friday when he played down the wider implications of the gunman's ideology, saying that violent white nationalism is not a growing problem.

"It's a small group of people," he said.

"The primary terrorist threat to the United States continues to be from Islamist militants and those they inspire, but we should not and cannot and must not ignore the real and serious danger posed by domestic terrorists," she said.

"They are using the same do-it-yourself, mass murder tactics as we saw with the horrible assault last week in New Zealand against Muslim worshipers," she said.

Trump's dismissal of a broader security threat led to a flurry of criticism from Democrats and other critics over the weekend.

Read Also
Trump to ask for $11.7b for border wall in budget: Sources 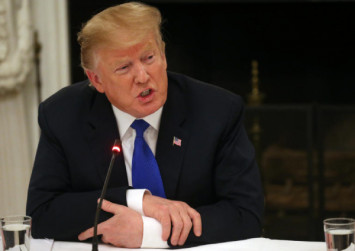 They pointed to his frequent labeling of illegal immigrants as invaders, his high-profile restrictions on immigration from several Muslim-majority countries, and a lukewarm condemnation of a neo-Nazi march in Charlottesville, Virginia, in 2017.

"Time and time again, this president has embraced and emboldened white supremacists - and instead of condemning racist terrorists, he covers for them. This isn't normal or acceptable," tweeted Kirsten Gillibrand, who formally entered the Democratic race for the White House Sunday.

Acting White House chief of staff Mick Mulvaney went on television Sunday to push back, saying "the president is not a white supremacist. I'm not sure how many times we have to say that".

"To simply ask the question every time something like this happens overseas, or even domestically, to say, 'Oh, my goodness, it must somehow be the president's fault,' speaks to a politicisation of everything that I think is undermining sort of the institutions that we have in the country today," he said on Fox television.