WASHINGTON - US President Donald Trump faced scathing criticism on Thursday (Nov 1) for an advertisement linking Democrats and immigrants to violent crime, with some fellow Republicans blasting it as "sickening" and the most racially divisive political ad in three decades.

"This ad, and your full approval of it, will condemn you and your bigoted legacy forever in the annals of America's history books," Al Cardenas, the Florida Republican Party's former chairman, wrote on Twitter.

The online ad features courtroom footage of Luis Bracamontes - an illegal immigrant from Mexico convicted in the 2014 killings of two police officers in Sacramento, California - saying in accented English he would kill more cops.

The ad cuts between clips of Bracamontes and scenes of migrants, likely a reference to a caravan of up to 3,000 Central Americans headed through southern Mexico en route to the US border.

"Who else would Democrats let in?" asks the ad, which Trump tweeted late on Wednesday. The ad ends with the tag: "President Donald J. Trump and Republicans are making America Safe Again!,"a play on Trump's "Make America Great Again" slogan.

Trump's presidential re-election campaign paid for the ad, US news media reported. The campaign did not immediately respond to a request for comment.

"This is a sickening ad. Republicans everywhere should denounce it," US Senator Jeff Flake, one of Trump's most prominent Republican critics, said on Twitter on Thursday.

This is a sickening ad. Republicans everywhere should denounce it. https://t.co/5sftOt57pI

In an interview with CNN, Perez described the ad as"fear-mongering."

Cardenas called Trump "a despicable divider; the worse social poison to afflict our country in decades."

Trump, whose administration takes a hard-line approach to legal and illegal immigration, has focused on the caravan to drum up support for Republican congressional and gubernatorial candidates ahead of Tuesday's congressional elections. 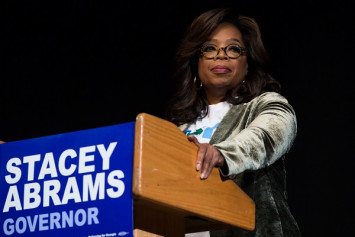 Democrats are generally favoured to win the 23 seats they need to gain a majority in the US House of Representatives, an advantage they could use to block Trump's agenda. Republicans have a stronger chance of keeping control of the Senate, according to opinion polls and nonpartisan forecasters.

Some Democrats, including Robert Reich, who served as secretary of labour in the Clinton administration, compared the spot to the 1988 "Willie Horton" ad, which supporters of Republican then-candidate George HW Bush used to great effect against Democratic rival Michael Dukakis.

Horton was a convicted murderer who went on a crime spree while on furlough from prison under a programme supported by Dukakis, then governor of Massachusetts. The ad was widely criticised for emphasising that Horton was black.

"This may be the most desperate and vile ad since Willie Horton," Reich said on Twitter. "They've resorted to fearmongering."

It is not the first time that Trump has used Bracamontes in a political ad. The man also featured in a January video tied to the anniversary of Trump's Jan 20, 2017 inauguration.