US President Donald Trump declared on Monday that he has "never" worked on behalf of Russia after bombshell reports were published on his alleged ties to the Kremlin.

"I never worked for Russia and you know that answer better than anybody," Trump told reporters at the White House. "It's a disgrace that you even ask that question. It's all a big fat hoax."

Trump's angry comments followed a New York Times report that the FBI investigated suspicions that Trump might be acting on Russia's behalf after he sacked the bureau's director in 2017.

A separate Washington Post report said Trump also aroused concerns by going to unusual lengths to prevent even his close aides from knowing the subjects of conversations he had during summits with President Vladimir Putin.

Read Also
Trump under fresh scrutiny over relationship with Putin 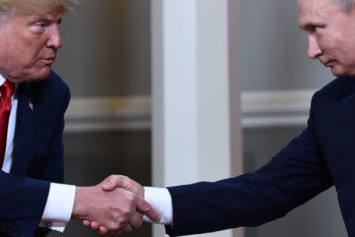 "It's a lot of fake news," Trump said, stressing that he has "those meetings one on one with all leaders".

"I have relationships with almost everybody and that's a good thing not a bad thing," he said.

He said the leaders of the FBI at time who decided to investigate him were "known scoundrels, I guess you could say dirty cops".

It is not clear what conclusions the FBI probe reached and what its status might be now.

Trump is also at the centre of a huge investigation led by special prosecutor Robert Mueller, who is looking into allegations the Kremlin tried to influence the 2016 presidential election and may have colluded with Trump's campaign.