OSAKA - United States President Donald Trump said on Saturday (June 29) he was open to meeting Kim Jong Un at the demilitarised zone between North and South Korea while on a trip to Seoul this week.

"After some very important meetings, including my meeting with President Xi of China, I will be leaving Japan for South Korea (with President Moon). While there, if Chairman Kim of North Korea sees this, I would meet him at the Border/DMZ just to shake his hand and say Hello(?)!" Trump tweeted from Japan's Osaka, where he is attending the G-20 summit.

Trump told reporters on Saturday: "We'll be there and I just put out a feeler because I don't know where he is right now. He may not be in North Korea." "If he's there, we'll see each other for two minutes, that's all we can, but that will be fine," he added.

Trump said he and Kim "get along very well."

The surprise offer came amid a recent flurry of diplomacy over North Korea's nuclear programme after a Trump-Kim summit in Hanoi collapsed without an agreement.

After several months of public silence, an exchange of letters between the leaders appeared to have thawed the deep-freeze and raised hopes for a third summit meeting after a historic first tete-a-tete in Singapore on June 12, 2018 and the second in Hanoi in February.

According to South Korea's Unification minister, the two leaders have exchanged a total of 12 letters since the beginning of last year, with Kim the more assiduous suitor in their nuclear bromance, penning eight of those.

The White House on Friday declined to comment on whether Trump was scheduled to go to the DMZ. 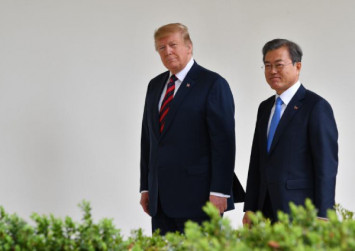 US special envoy Stephen Biegun said on Friday the United States was ready to hold constructive talks with North Korea to follow through on a denuclearisation agreement reached by the two countries last year, South Korea's foreign ministry said.

Biegun told his South Korean counterpart, Lee Do-hoon, that Washington wanted to make "simultaneous, parallel" progress on the agreement reached at a summit between Trump and Kim in Singapore last year, the ministry said in a statement.

Trump will be heading to Seoul immediately after the G-20 summit in Osaka, where on Saturday he will hold a highly anticipated meeting with Chinese President Xi Jinping in a bid to ease trade tensions between the world's top two economies.

Russian President Vladimir Putin told South Korean President Moon Jae-in at a meeting on the sidelines of the G-20 summit that Mr Kim had told him in April security guarantees were key, and that corresponding measures were needed to realise denuclearisation, according to South Korea's presidential office on Saturday.

Last week, Xi visited Pyongyang for a highly symbolic summit with Kim. Analysts say that diplomatic breakthroughs often follow on from such meetings.

The Hanoi summit floundered amid disagreements on what the North would be willing to give up in exchange for sanctions relief.

The two sides blamed each other for the breakdown but Washington has said they are prepared to meet the North Koreans at any time without preconditions to keep diplomacy alive.

Apparently voicing his frustration at the diplomatic stalemate, Kim fired off several short-range "projectiles" that Trump shrugged off.

Mr Trump has previously said publicly he had received a very warm "beautiful letter" from Mr Kim. He has not divulged its contents, but the White House official, who did not want to be identified, described the letter as "very flowery."

The North last carried out a missile test in November 2017, before a rapid diplomatic rapprochement saw tensions ease on the peninsula and produced a series of summits.

The DMZ was witness to extraordinary scenes during a summit between Kim and South Korean President Moon Jae-in when the North's young leader yanked his counterpart across the border line in an emotional symbol of unity after decades of aggression.

"President Trump made his pitch for a short summit with Chairman Kim on Twitter as White House officials most likely have tried - and failed - to set up such a meeting through official diplomatic or South Korean channels," Harry J. Kazianis of the Center for the National Interest said.

If the meeting happens, "while no major agreements will be signed, both sides can reaffirm their commitment to dialogue and diplomacy, essentially resetting the table for a future deal in the weeks and months to come," Kazianis added.

Writing on Twitter, analyst Ankit Panda of the Federation of American Scientists said: "I guess the best case outcome is that a meeting happens and some of the non-denuclearisation matters that had been agreed in Hanoi... see progress."

He cited a possible declaration of the end of the Korean War that technically ended with a ceasefire, as well as the establishment of liaison offices as a first step towards normalising ties between the historic foes.

"Of course, nothing could happen at all too," said Panda.