Former US President Donald Trump speaks during a rally to boost Ohio Republican candidates ahead of their May 3 primary election, at the county fairgrounds in Delaware, Ohio, US, on April 23, 2022.

NEW YORK - Former President Donald Trump must pay a fine of US$10,000 (S$13,800) per day starting on Tuesday (April 26) until he complies with a subpoena to hand over material about his business practices to New York's attorney general, a New York judge said, adding that the clock was ticking on completing the probe.

The state judge, Arthur Engoron, on Monday held Trump in civil contempt for "repeated failures" to hand over materials to Attorney General Letitia James for a civil investigation launched three years ago into the whether the Trump Organisation improperly valued assets to obtain financial benefits.

In a written ruling, Engoron wrote that James' office had "satisfied its burden of demonstrating that Mr Trump willfully disobeyed a lawful court order" and said Trump must pay US$10,000 per day, beginning on Tuesday, until he complies.

Engoron said more delays could prevent the attorney general's office from taking action against Trump or the Trump Organisation. James has said the probe already turned up evidence that assets including golf clubs and a penthouse apartment were improperly valued.

"Each day that passes without compliance further prejudices (the attorney general's office), as the statutes of limitations continue to run," Engoron wrote, adding that the delays could result in James' office "being unable to pursue certain causes of action that it otherwise would."

Kevin Wallace, senior enforcement counsel at James' office, said at a court hearing on Monday that the attorney general "will likely need to bring some kind of enforcement action in the near future," without elaborating.

Trump, a Republican, has denied wrongdoing and has called the probe politically motivated. James is a Democrat.

Trump's attorney Alina Habba did not immediately reply to a request for comment. After the court hearing on Monday, Habba said Trump would appeal the decision.

The former president previously lost a bid to quash the subpoena, then failed to produce the documents by a court-ordered March 3 deadline, later extended to March 31 at his lawyers' request.

At the court hearing, Habba maintained that Trump did indeed comply with the subpoena and did not have the documents James requested. 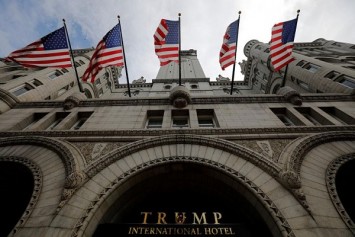 In his written ruling, Engoron said Trump had not refuted James' assertions that he failed to search several file cabinets for relevant documents. He said there was not enough evidence that Trump had conducted a thorough search.

In the past, James has said the investigation has found"significant evidence" that the Trump Organisation included misleading asset valuations in more than a decade of its financial statements.

The attorney general has questioned how the company valued the Trump brand, as well as golf clubs in New York and Scotland and Trump's own penthouse apartment in Midtown Manhattan's Trump Tower.

In some cases, the assets were overvalued to obtain favourable loan terms and in other cases, they were undervalued to win tax benefits, the attorney general has said.