Newlyweds Oksana Balandina and Viktor Vasyliv having their first dance.

The groom lifted his wife up in his arms and turned her around between the hospital beds, as she put one arm around his neck and held a bandaged hand to his chest.

It is a moment the 23-year-olds thought they would never share after Balandina lost both her legs weeks earlier when a landmine exploded on March 27, a little over a month after Russia invaded, as the couple walked home in Lysychansk in Ukraine's eastern Luhansk region.

"I only managed to shout to him [Vasyliv]: 'Honey, look!'", said Balandina, as she recalled the moment it happened.

"He looked at me when the mine exploded. I fell down with my face on the ground. There was an extreme noise in my head. Then I turned around and I started to tear off the clothing on me. I thought it would be easier to breathe because there was not enough air," Balandina recalled.

Vasyliv, who was walking behind her, was unhurt.

"When it happened, I gave up in despair, I did not know what to do. I saw her not moving," he said.

"If it was not for Oksana, I don't know what would have happened. She is so strong. She did not faint. It was Oksana who coordinated our actions," he added.

Balandina has spent the last month being treated in various hospitals around the country. In the end, doctors had to amputate both of her legs and four fingers of her left hand.

She said she spent many of those days in a dark place. 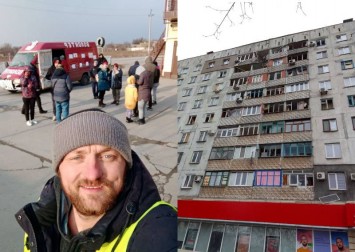 "But thanks to the support, I accepted it. I need to keep living. It is not the end of life. If God left me alive, that's my destiny."

Her two children - a 7-year-old son and a 5-year-old daughter - are now safe with their grandparents in the Poltava region in central Ukraine.

After celebrating their wedding in hospital, the couple are hoping to travel to Germany where Balandina will get prosthetic legs and undergo rehabilitation.

The road ahead is long and with no sight of peace in Ukraine, Balandina says she can only focus on the here and now, and on her recovery.

"I want to go back to our town, to Lysychansk, but frankly speaking, I am worried for my children. When the war is over, there will be so many things happening. The road was mined… It is scary," she said.

Russia denies its troops killing or targeting civilians in what Moscow calls a "special operation" to disarm the country and protect it from fascists.

Vasyliv said he's grateful for each day that he shares with his new wife.

"I was afraid to lose her. I wanted to cry, but I could not cry. I was shocked, I could not comprehend that it was happening indeed. It was terrifying to lose the person I love," he said.