US still 'a ways away' from sending troops back into Ukraine, Denmark to send Kyiv US-made weapons

A US army soldier walks towards an airbase near Arlamow, Poland, amid the Ukraine war, on April 5, 2022.

WASHINGTON - The United States is still "a ways away" from any possible decision on whether to re-introduce US troops into Ukraine, General Mark Milley, chairman of the Joint Chiefs of Staff, said on Monday (May 23), even as he acknowledged low-level planning underway.

President Joe Biden decided to withdraw American troops from Ukraine before Russia's Feb 24 invasion in order to avoid a direct conflict with a nuclear-armed adversary.

But changing circumstances including a reopening of the US embassy have raised questions about whether US troops may be required to return to help ensure security of diplomats in a country at war.

At a news conference, Milley acknowledged some degree of staff planning ahead of a potential decision to send US troops back into Ukraine. That planning hasn't made it to his level for review or to the level of US Defence Secretary Lloyd Austin.

Then, ultimately, it would be up to Biden.

"At the end of the day, any reintroduction of US forces into Ukraine would require a presidential decision. So we're a ways away from anything like that," Milley said.

"We're still developing courses of action, and none of that's been presented yet to the Secretary."

Milley did not specify whether he was referring to low-level planning for US troops to potentially secure a US diplomatic presence in Ukraine or potentially for other activities as well.

The Pentagon is helping Ukraine battle Russian troops by sharing intelligence and sending it weaponry.

On Monday, Austin announced new security assistance packages from 20 countries for Ukraine after hosting a virtual meeting with allies.

That includes a pledge by Denmark to provide Harpoon anti-ship missiles and a launcher to Ukraine, Austin said.

"Everyone here understands the stakes of this war," Austin said, adding that he was "especially grateful to Denmark which announced today that it will provide a Harpoon launcher and missiles to help Ukraine defend its coast.".

Copenhagen's pledge of Harpoon anti-ship missiles and a launcher to Ukraine is the first sign since the Russian invasion in February that Kyiv will receive US-made weapons that significantly extend its striking range.

Ukraine has been seeking more advanced weapons such as air defences, anti-ship missiles and longer-range rockets, but so far the majority of aid has been in short-range systems like Javelin anti-tank weapons and artillery.

The Harpoons could be used to push the Russian navy away from Ukraine's Black Sea ports, allowing exports of grain and other agricultural products to resume.

Tom Karako, a senior fellow at the Centre for Strategic and International Studies, said the Harpoon missiles, made by Boeing, would be able to help Ukraine threaten high-value Russian ships attacking Ukraine. 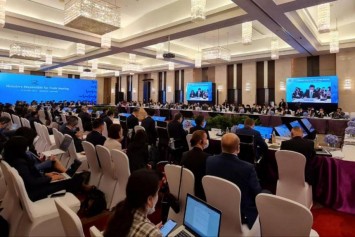 Reuters reported last Thursday the United States has been working to help transfer to Ukraine more anti-ship capabilities with a range of more then 100km as its ports are blockaded by ships and mines.

"This is an important and measured step to increase the Ukrainians' capability and operational intensity against the Russians," Karako, who is also the director of the Missile Defence Project said. He added that the weapons "will hold at risk high-value Russian ships attacking Ukraine from the Black Sea or elsewhere."

Congressional sources and a US official have said Ukraine's Neptune anti-ship missiles are in short supply, so the Harpoons offer Ukraine more capability to push Russian ships back and begin de-mining operations.

With the Harpoon missiles, Ukraine will likely depend on other nations for targeting data to use the systems effectively against ships at longer ranges, Karako noted. A handful of countries were willing to send Harpoons to Ukraine, US officials and congressional sources have said.

But a US official said no nation had wanted to be the first or only nation to send Harpoons, fearing reprisals from Russia if a ship is sunk with a Harpoon from their stockpile.