US writer sues Trump for defamation after alleged rape

NEW YORK - A respected US writer who says US President Donald Trump raped her over two decades ago sued the president for defamation on Monday (Nov 4) after he ridiculed her as "not my type."

E. Jean Carroll, a magazine advice columnist, filed the lawsuit in a New York court, claiming Trump's denials of the alleged sexual assault had damaged her reputation and career.

"When I had the courage to speak out about the attack, he defamed my character, accused me of lying for personal gain, even insulted my appearance," she said in a statement.

Carroll, 75, alleged earlier this year that Trump raped her in a dressing room at the Bergdorf Goodman store in Manhattan in the mid-1990s following a chance encounter.

She said the sexual assault took place after Trump - then a prominent real estate developer - asked her for advice on buying lingerie for an unnamed woman.

The president denied knowing Carroll and accused her of "totally lying" when the claims were put to him in an interview with The Hill, a political news outlet, in June.

Carroll, who writes a long-running column in Elle magazine, became at least the 16th woman to have accused Trump of sexual misconduct before he became president.

Read Also
Trump on rape accuser: 'She's not my type' 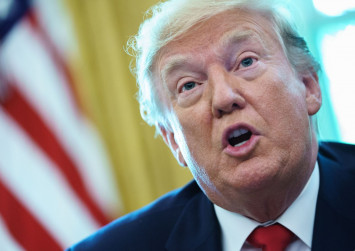 Her account was first revealed in an excerpt of her new memoir that was published by New York magazine.

Carroll said she never went to the police at the time because she was afraid of repercussions.

The 27-page complaint filed in Manhattan, which seeks unspecified damages, accuses Trump of knowingly lying about the alleged assault.

"He smeared her integrity, honesty, and dignity - all in the national press," it reads.

Carroll said she felt compelled to speak up by the #MeToo movement in 2017 which saw dozens of woman make sexual assault allegations against famous men.

"I am filing this on behalf of every woman who has ever been harassed, assaulted, silenced, or spoken up only to be shamed, fired, ridiculed and belittled," she tweeted Monday.

"No person in this country should be above the law - including the president," Carroll added.