Vadym Slobodianiuk, 48, reacts as he speaks about death of his parents during Russian occupation in the village of Blahodatne, retaken by the Ukrainian Armed Forces a day ago, amid Russia's attack on Ukraine, in Kherson region, Ukraine, on Nov 11.

BLAHODATNE, Ukraine – The Russians left Blahodatne in the same direction from which they came, pulling out of the remote Ukrainian village under cover of darkness to join the rest of their force retreating across the Dnipro River.

Only a handful of residents remained through more than eight months of occupation, and after Ukrainian forces moved in on Thursday (Nov 10) unopposed there were tears of relief and joy.

There were also harrowing memories and unanswered questions. Villagers identified at least one neighbour who had been shot dead by the Russians, and three they said had been carried off by the occupying troops, never to be heard from again.

Reuters could not independently verify those accounts and Russia's defence ministry did not immediately respond to questions about the allegations.

"We've had two nights of quiet sleep," said a jubilant Halyna, a diminutive 81-year-old who was born in Volgograd, Russia, and whose parents moved to the village when she was 11.

Standing with a rusty bicycle and dabbing tears from her eyes, she added: "There was shooting all the time from three directions. But they left two nights ago. Now they need to leave Kherson."

Serhii Kalko, another of roughly 60 people who stayed in Blahodatne out of a pre-war population of 1,000, was struck by how quiet the final retreat had been.

"They left silently. They didn't even speak with each other," the 43-year-old told Reuters.

Reuters reached Blahodatne, some 20 km (12 miles) north of the strategic port city of Kherson, on Friday.

It was one of dozens of settlements that Ukrainian forces have recaptured in recent days as Russia withdraws from the area in a significant battlefield defeat.

The ultimate prize is Kherson itself, where video footage verified by Reuters showed dozens of people cheering and chanting victory slogans as the apparent first Ukrainian troops to arrive snapped selfies in the crowd.

In surrounding towns and villages, residents told of life under occupation following Russia's full-scale invasion of Ukraine on Feb 24.

Villagers estimated that about 100 Russian troops had held Blahodatne.

When they arrived, some villagers said, the Russians aggressively searched for anyone affiliated with groups Moscow has long vilified as nationalists. The troops also demanded that residents surrender mobile phones, they added.

Villagers said that throughout the occupation, Russians broke into vacant homes and looted them, removing furniture and appliances such as televisions, stoves and refrigerators.

Kalko took Reuters to a neighbour's home where he pointed to a small window that he said was broken by a Russian soldier with the butt of his rifle to gain entry.

The interior was strewn with piles of clothing, toys, empty boxes and cabinets with doors broken off. 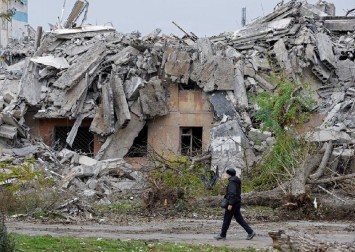 "In every home where people did not live, they stole everything of value," he said, wiping tearing eyes.

"He was a bit drunk and he walked towards the Russian positions near the trees," Hodykin said, adding that the Russians dumped his body in his back yard for locals to bury.

Two young men – Vitaliy Siroha and Yura Karpinskiy – were arrested and taken away at around the same time and had not been seen since, according to Kalko. He said the Russians also took away his neighbour's niece, who had been wounded by an incoming shell.

Moscow proclaimed the area eternally part of Russia after holding what it called referendums in Kherson and three other regions in September, votes denounced by Kyiv and Western governments as illegal and coercive.

On Friday, Ukrainians soldiers were taking over positions dug by the Russians along the track leading to the village from the highway that heads south to Kherson.

At the entrance of Blahodatne, Ukrainian troops inspected a large stockpile of 120 mm mortar shells, some with their fuses screwed into their noses, abandoned by Russians in a dilapidated warehouse.