World scrambles to save Iran deal that Trump tried to sink

US President Donald Trump faced diplomatic isolation on Wednesday as world powers scrambled to save a landmark deal curbing Iran's nuclear programme that he has rejected.

Trump's decision to withdraw from the accord and reimpose sanctions on the Islamic republic overturns years of diplomacy, could worsen instability in the Middle East and threatens business in Iran worth billions of dollars.

While Tehran's regional rivals Saudi Arabia and Israel applauded Trump's decision to pull Washington out of the 2015 accord, Iran reacted furiously to the move, with lawmakers burning a US flag and chanting "Death to America."

French President Emmanuel Macron and Iran's Hassan Rouhani agreed Wednesday to work toward the continued implementation of the nuclear deal despite the US decision, which Macron called "a mistake".

Earlier German Chancellor Angela Merkel said European signatories would "do everything" to ensure the agreement's parameters remain in place.

The pledges came as Iran's supreme leader Ayatollah Ali Khamenei told the government in Tehran it too should quit the nuclear deal unless Europeans offer solid guarantees that trade relations would continue.

Other signatories, including major trade partner Beijing, also promised to work to uphold the accord.

China insisted it would maintain "normal economic and trade exchanges with Tehran" and "continue to devote itself to safeguard and implement the deal."

Slapping aside more than a decade and a half of diplomacy by Britain, China, France, Germany, Iran, Russia and past US administrations, Trump called Tuesday for a "new and lasting deal."

He described the existing accord as an "embarrassment" to the United States that did nothing to contain Iran's nuclear ambitions.

But the UN's nuclear watchdog, which is charged with ensuring Iran abides by the terms of the deal, said Wednesday Tehran was upholding its "nuclear-related commitments."

Trump said a deal with Iran would have to include not just deeper restrictions on its nuclear programme, but on its ballistic missiles and support for militant groups across the Middle East.

But he also said Iran would discuss its response with other parties to the deal before announcing a decision.

Stoking fears of a Middle East arms race, Saudi Foreign minister Adel al-Jubeir told CNN the kingdom would pursue its own nuclear weapons if Iran resumed its alleged quest for the bomb. 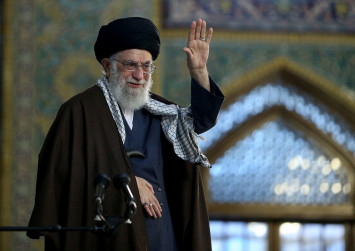 Iran has always denied seeking a nuclear weapon, insisting its atomic programme was for civilian purposes.

Doubling down on Wednesday, Trump told reporters at the White House there would be "very severe consequences" if Iran were to resume its nuclear enrichment programme, which the 2015 deal curbed in exchange for sanctions relief.

Trump's decision marked a stark diplomatic defeat for Europe, whose leaders urged the US president to think again.

US Defence Secretary Jim Mattis insisted Wednesday that the US would keep working with its allies to prevent Iran from getting nuclear weapons -- despite Trump's withdrawal from a deal designed to do just that.

"We will continue to work alongside our allies and partners to ensure that Iran can never acquire a nuclear weapon, and will work with others to address the range of Iran's malign influence," Mattis told a Senate panel.

Macron, who in recent weeks made a deliberately public effort to talk Trump around, said in an interview with German media that it was vital for the deal's other parties to reaffirm their commitment.

"The Europeans' decision allows us to prevent Iran from immediately restarting their (nuclear) activities and to avoid escalating tensions," Macron said.

Rouhani for his part said Iran's economic interests would however need to be "guaranteed" in light of Trump's decision, the Iranian presidency's website said.

Trump's advisor John Bolton said earlier that European firms doing business in Iran have a six-month deadline to wind up investments or risk US sanctions.

The move offers Trump a domestic victory, fulfilling a longstanding campaign promise, and sent oil prices surging to levels not seen in three years -- but the long-term impact for US foreign policy and for the Middle East was less clear.

Turkish President Recep Tayyip Erdogan said the United States will "lose in the end" from its decision, while Russia's Vladimir Putin expressed his country's "deep concern" over the US withdrawal.