Zelenskiy demands Western nations give arms to Ukraine, asks if they're afraid of Moscow

A handout photo. Ukraine's President Volodymyr Zelenskiy attends an award ceremony for members of the National Guard, as Russia’s attack on Ukraine continues, in Kyiv, Ukraine, on March 26, 2022.

LVIV/KYIV - Ukrainian President Volodymyr Zelenskiy, visibly irritated, demanded that Western nations provide a fraction of the military hardware in their stock piles to his country and asked whether they were afraid of Moscow.

Several countries have promised to send anti-armour and anti-aircraft missiles as well as small arms but Zelenskiy said Kyiv was not getting what it needed.

"It is tanks for our state. It is missile defence. It is anti-ship weapons. That is what our partners have, that is what is just gathering dust there," he said in his now customary late-night video address on Saturday (March 26). "This is all not only for the freedom of Ukraine but for the freedom of Europe."

Ukraine needs just one per cent of Nato's aircraft and one per cent of its tanks, he said, adding that it would be impossible to stop Russian attacks on the besieged southern port of Mariupol without enough tanks, armoured vehicles and aircraft.

"We've already been waiting 31 days. Who is in charge of the Euro-Atlantic community? Is it really still Moscow, because of intimidation?" he said.

Zelenskiy has repeatedly argued that Russia will seek to expand further into Europe if Ukraine falls. However Nato has rebuffed his calls for a no-fly zone to be established over Ukraine on the grounds that this could provoke a wider war.

Earlier in the day Zelenskiy spoke with Polish President Andrzej Duda and expressed disappointment that Russian-made fighter aircraft in Eastern Europe had not yet been transferred to Ukraine, Zelenskiy's office said in a statement.

Zelenskiy said Poland and the United States had both stated their readiness to make a decision on the planes. But Washington rejected a surprise offer by Poland to transfer MiG-29 fighter jets to a US base in Germany to be used to replenish Ukraine's air force. 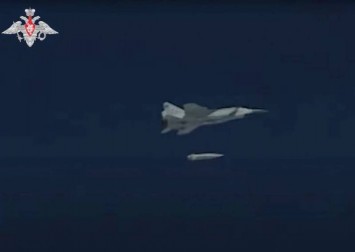 Ukrainian Air Force spokesman Colonel Yuri Ignat told Reuters the country's pilots had trained for years and conducted joint exercises with US pilots precisely because "we understood that there could be such a scenario".

Ukraine now needs fighter jets such as American F-15s and F-16s to supplement Ukraine's ageing Soviet-era MiG-29s and Sukhoi planes, he said, in order to overcome Russia's numerical and technological superiority in the air.

"We would be grateful for the Soviet-made equipment offered to us by the countries of Central Europe which still have it. But it will not be enough," he said.

"We would also like to have Western planes, such as F15, F16. We don't ask for anything more, like the F35," Ignat added, referring to a more modern model of US combat aircraft.