The late Stanley Ho with his fourth wife Angela Leong

With four wives (one of them deceased), a personal fortune estimated at US$6.4 billion, and relatives eyeing his estate after his death, one wouldn't be surprised that the late casino king Stanley Ho's life and demise play like a dramatic TV series.

And the latest episode in the real-life soap opera? That he indeed had a secret son only previously gossiped about and never confirmed.

Before the news was revealed over the weekend, the official statement was always that Ho had 16 children, although two of them had already died. There was previous chatter that there was a 17th child named Ho Yau-kar, but daughter Sabrina Ho had denied it flatly, saying "There's no one named Ho Yau-kar at all".

His identity was revealed only after Ho's newspaper obituary was published on Saturday (June 27). All of Ho's children were listed according to their age, and local media guessed his age to be around 28.

His existence was publicly confirmed when Ho's fourth wife Angela Leong released a heartfelt statement that same day, saying the young man is her child with Ho. 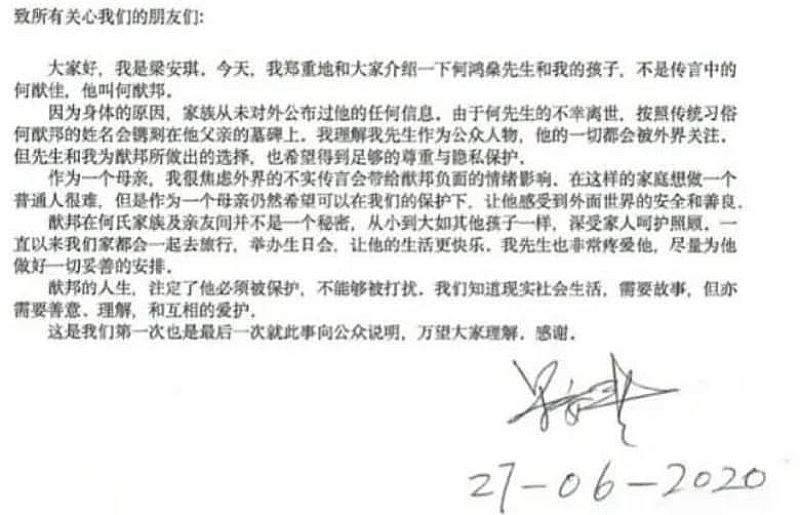 "Because of health reasons, the family has never revealed any news about [Yau-bong]. With Mr Ho's unfortunate death, Ho Yau-bong's name will be engraved on his father's tombstone as per tradition," Leong wrote.

"I understand that my late husband is a public personality and thus, his actions would be publicly scrutinised. But both of us hope that the decisions we made for Yau-bong would be respected and his privacy would be protected.

"As a mother, I'm very worried that false public rumours will negatively affect Yau-bong's emotions. It's very difficult for someone in our family to live like a normal person. But I still wish that, with our protection, he can experience kindness and security in our society.

"Yau-bong is not a secret within the circle of the Ho family and our close friends. Like the rest of the children, he has received our love and concern ever since he was young. We went on holidays and had birthday parties to make his life happier. My late husband also doted on him, and did everything within his means in the arrangements for Yau-bong."

Leong ended her statement saying Yau-bong is destined to be protected and that he cannot be disturbed. While society needs "stories", she believes it also needs kindness, understanding and compassion for each other.

This would also be the only time that the family will make a statement on Yau-bong.

Besides Yau-bong, Leong and Ho have four other children: Sabrina, Arnaldo, Mario, and Alice.

Stanley Ho died on May 26 at the age of 98. A public memorial for him will be held on July 9 at the Hong Kong Funeral Home in North Point, and his funeral will take place the next day, before his burial in Chiu Yuen Cemetery on Mount Davis.