Some say names are a blessing from one's parents, but it might just be the exact opposite for this Indonesian boy.

A couple in Tuban Regency, Indonesia, have come to their wits' end as they struggle to legally register their son, whose name is too long to for the civil registry system.

He was born in January 2019, but has yet to receive his official documents.

The boy's father, Arif Akbar, told Kompas, "I've been fighting for three years to process [my son's] birth certificate at the agency. Every time we visited the office, we are told to wait. The last time [we went], we were offered the solution to change my son's name."

However, the couple is unwilling to do so, citing that all of Cordo's 18 names have deep philosophical meanings, containing their hopes and prayers for his future.

"The meaning [of his name] is for him to become a worldly figure who is known across the world, an individual who doesn't think narrowly, or primordially, but has global insight as well as the initiative and power to realise his great insight," explained his father in Detik.

Determined to keep his name as it is, Arif and his wife have written a letter to Indonesian President Joko Widodo to allow his documents to be processed.

Read Also
‘It kinda stresses me out a bit’: These Singaporeans have uncommon names you probably can't pronounce 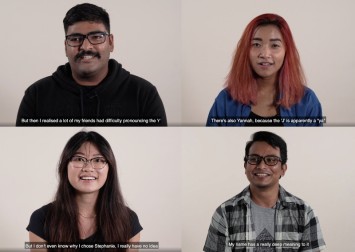 A snippet of the letter reads, "Our open letter to you is our last hope and to share our sadness. Maybe some are thinking, 'What's in a name?', but according to our customs the name is a person's character, pride, prayer and hope."

They also expressed that their son needs to get his official documents in order to enrol in school.

At the time of writing, the Indonesian President has not given any statement regarding the couple's request.

Kompas also interviewed Rahmad Ubaid, the Head of Population and Civil Registration Service in Tuban Regency, who confirmed that the region's civil registry system has a strict limit of 55 characters, including spaces.

However, he also emphasised that the authorities were not asking for the boy's name to be changed, but merely to be "adjusted to a maximum of 55 characters" so that it would fit into his official documents.

Cordo isn't the the first child that has been subjected to weird and quirky names.

On June 2021, the son of a Philippine web developer became famous when his mother announced on Facebook that his name was HTML.

In 2020, an Indonesian girl also made news when it was discovered that her legal name was 'Y' — the last letter in the Jawi alphabet.