Plagued with "begpackers" and rowdy drunks, Bali just can't catch a break when it comes to tourists.

In today's instalment of holidaymakers behaving badly, two tourists have apologised after one of them was caught splashing holy water on the other's butt.

It all started when Sabina Dolezalova, a fitness model based in the Czech Republic, uploaded a video on Instagram recently.

In the offending video, Dolezalova and Zdenek Slouka, also a fitness model, can be seen hugging and laughing on temple grounds. Dolezalova then bends over and hikes up her skirt as Slouka splashes water from the temple's fountain on her backside.

According to news website detik.com, the video was filmed at a temple in Ubud Monkey Forest.

The forest, which is home to three revered temples and over 700 monkeys, is an important spiritual domain for Bali's locals.

After the video went viral online, netizens were understandably upset. 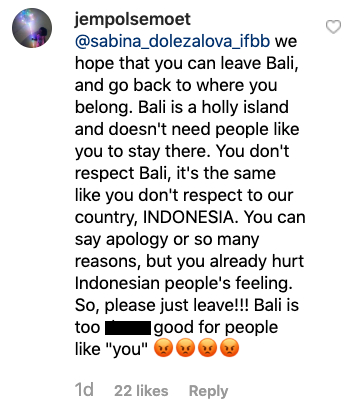 Some netizens even suggested that all tourists should be banned from visiting temples.

A representative of the local police department, Nyoman Nuryana, told reporters that Dolezalova and Slouka had met with the residents of Padangtegal village — which owns the Ubud Monkey Forest — on Aug 11 and personally apologised to them.

Additionally, Dolezalova and Slouka will be required to participate in a traditional ceremony on Aug 15 to seek forgiveness from the gods, said Nyoman.

Dolezalova and Slouka have also released an apology video online claiming that they were not aware of the significance of the place.

However, Czech-speaking netizens exposed Dolezalova and Slouka, asserting that the conversation in the original video reveals that the pair were actually aware that they were playing with holy water all along. 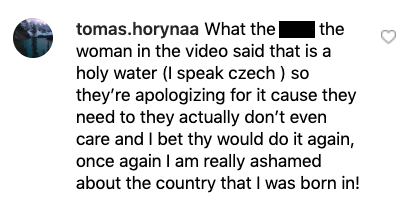 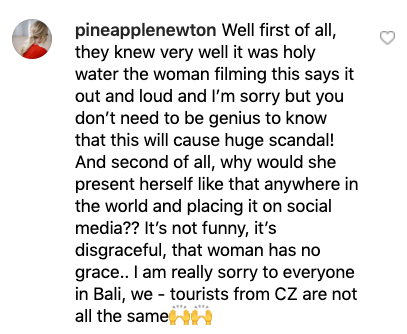 Seems like the pair were only sorry they got caught.

#Bali #INDONESIA #Tourism #Social media #In Case You Missed It