No coins needed: Meet the man who can help you build your own retro arcade machine

KJ, the mind behind RetroCade.

In a time of cutting-edge virtual reality, augmented reality sports, cloud gaming services, multi-million-dollar esports tournaments (and the list goes on), sometimes folks just want something a lot simpler when it comes to video games.

Analogue amusements like vinyl players, VHS, and cassette tapes used to be a dying format until hipsters started reanimating them into the present life. Nostalgia is a lucrative business to get into, and the demand for ghosts of pop-culture past remain the driving force behind so many comebacks; why else would Disney movie reboots, emo nights, and chunky dad shoes become such a raging success?

Emotions are where they get you, and it doesn’t even take much to hit all the right buttons. Hearing the Green Hill Zone chiptune in Sonic Mania on the PlayStation 4 is enough to put me back to my childhood playing on a hand-me-down Sega Genesis and a sputtering CRT TV.

It’s why arcade cabinets have continued to thrive in the digital age. But the bulky, coin-operated machines have given way to something a lot more bijou — portable, even. The hundreds of classic games we used to play at Timezone can now be fitted and run into something as small as an Android phone. Or if you’re an AliExpress shopper, a janky $16 Coolbaby Retro Mini 2 Rs-6A Handheld Game Console Emulator is enough to run 168 classic titles. 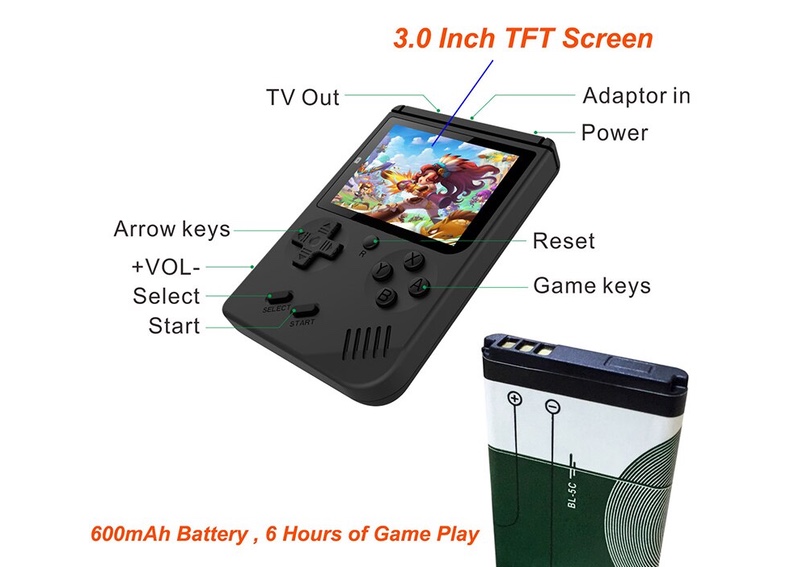 Today, arcade cabinets are a staple in man caves and cool bars. They’ve shrunk to a size where it’s undoubtedly HDB apartment-friendly, to the point where you can plop one in a cabinet without crushing the furniture. If the exteriors of the boxy machines are done up nicely, they could even be described as... adorable.

Oh, and they’re shockingly easy to build. Provided you have the tools, the materials, the gizmos, and the gracious assistance of a seasoned veteran like Keng Jin, the man at the centre of the old-school gaming workshop RetroCade. 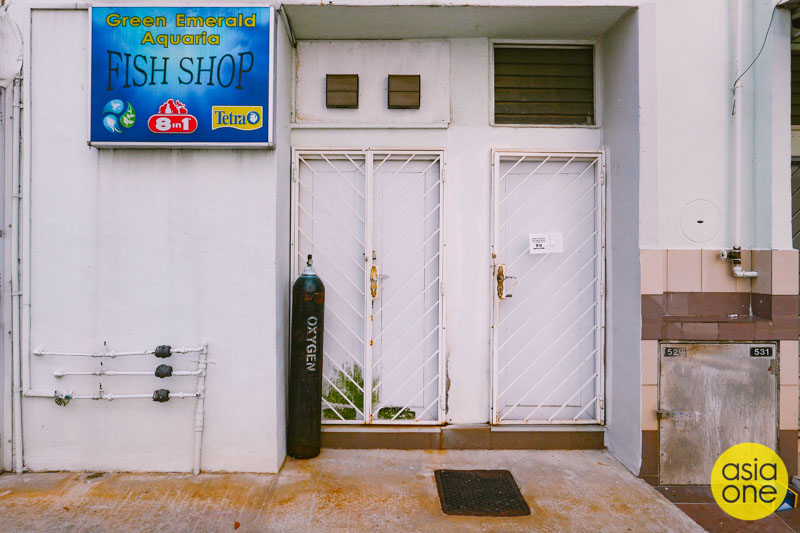 The RetroCade studio’s location is unassuming. Who’d expect to craft a full-fledged gaming machine in a spot perched on top of an aquarium shop in the quiet northern suburbs of Marsiling? I certainly didn’t when I got a wee bit lost looking for its entrance, which in the end, was a nondescript door at the back with only a small sign announcing its name. 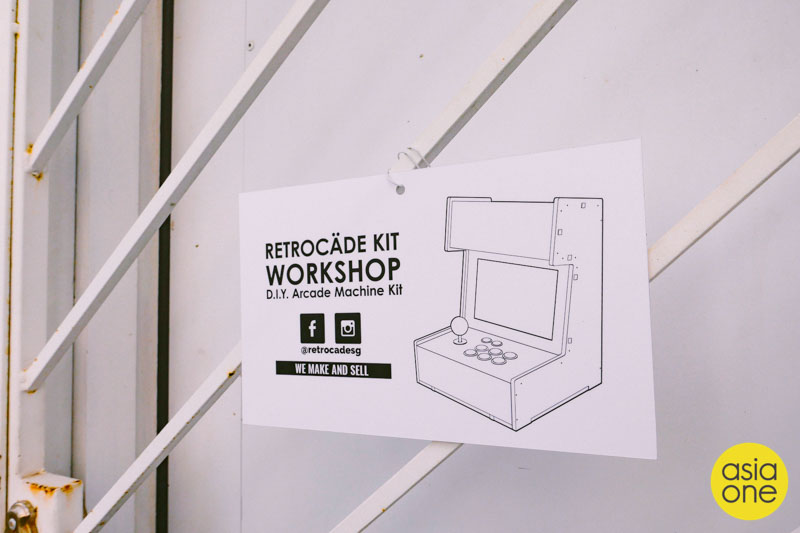 Once you make it up the flight of stairs, KJ (as he’s better known) greets you warmly, offering you a drink from the kitchen — any drink, including a hot cup of Milo. And it is more of a kitchen than a pantry because the RetroCade workshop is actually a cosy little shophouse. Made cosier only because of the massive worktable in the middle of the living room, big enough to support a multitude of participants all wanting to handcraft their own arcade machine. 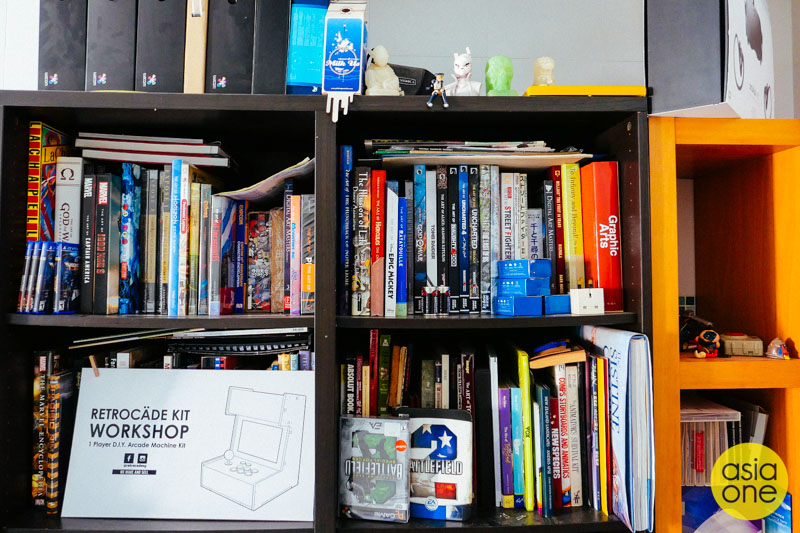 The studio is also a museum of sorts for KJ’s plethora of geeky memorabilia and arcade cabinets he made in the past. There’s a statue of Uncharted’s Nathan Drake; there’s a giant Street Fighter II mural; there’s an Ultraman figurine; there're volumes of video game art books  — it’s a certified man cave, alright. 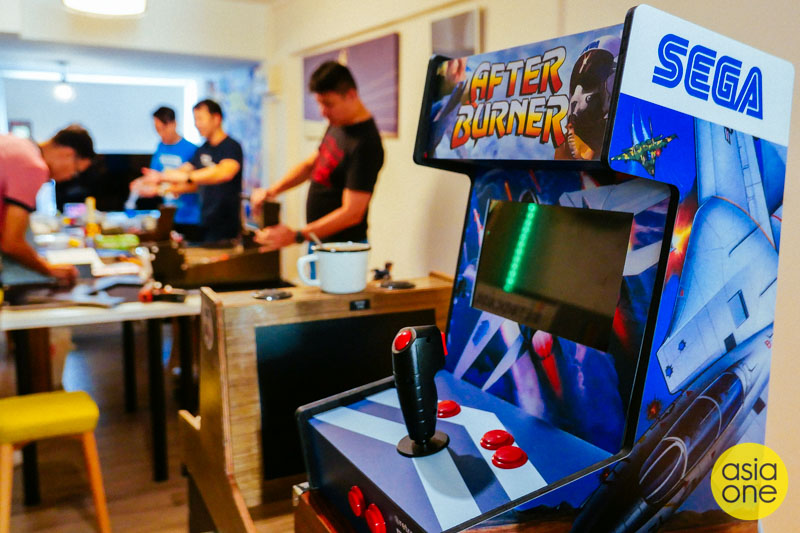 It’s there that he conducts his workshops. For $480, attendees need to show up and put in some elbow grease into building their 1-player arcade machine (forking out $850 gets you a bigger cabinet meant for 2 players). Tools such as hand drills and screws are provided alongside the pre-cut wooden panels needed to construct the gaming box. Instructions — done up in an Ikea-inspired style — are on hand, supplying easy-to-follow directions, including how to wire up the tiny Raspberry Pi processor to physical inputs like joysticks and buttons. 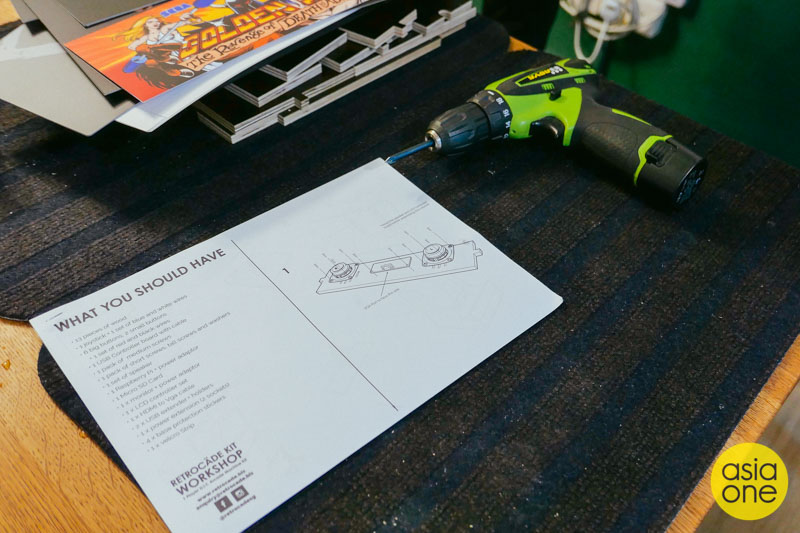 Still, rigging up an entire working gaming console requires quite a bit of assistance, which KJ and his associate Ken Poh readily provided. 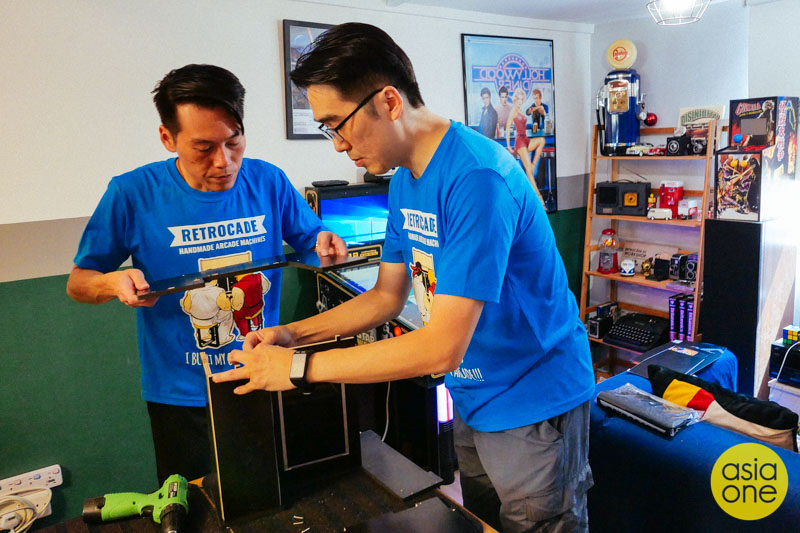 KJ fully understands the strenuous work involved. After all, he had to learn how to put things together by himself.

The house that KJ built 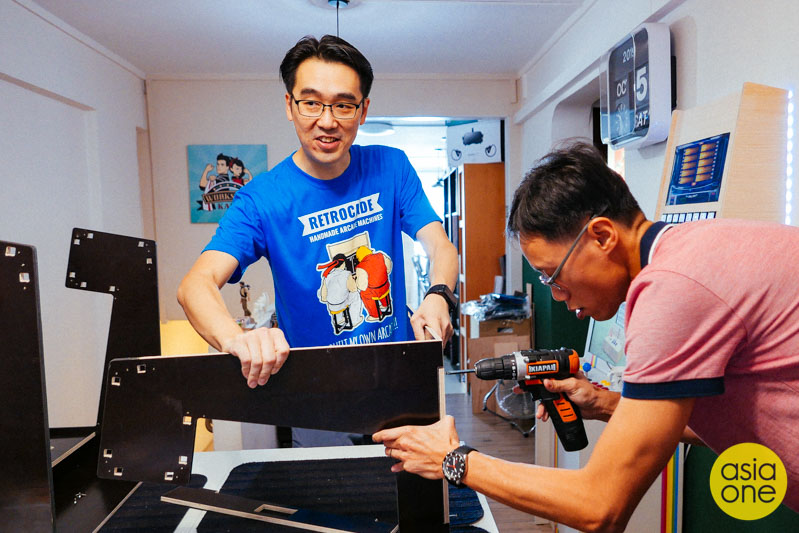 The first video game that made a significant impression on him was Super Mario Bros, which KJ played at his friend’s house at the tender age of eight. Decades later, he sought to recreate that sense of wonder with the very games he grew up with, having spent plenty of his childhood (and dollars) playing Street Fighter at arcades.

“A friend of mine told me that the Raspberry Pi could be used to run retro games,” he recalled. “I knew I had to build an arcade for myself.” 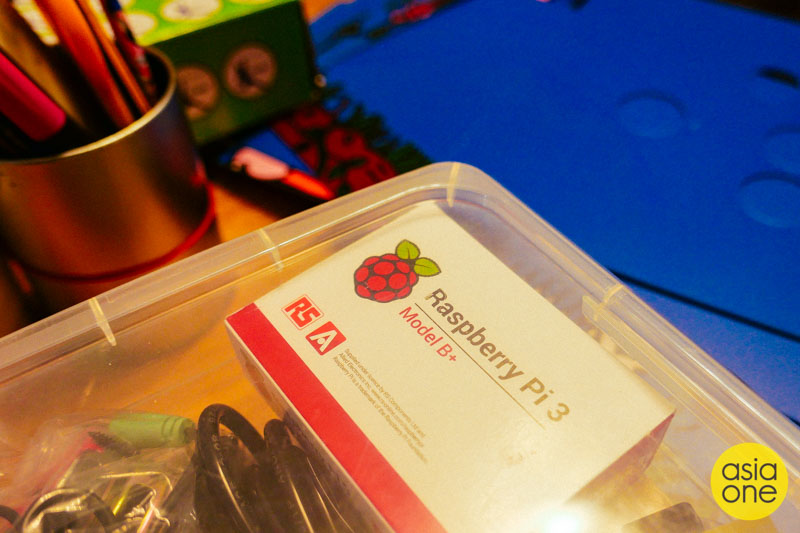 The first machine he made wasn’t pretty, he said — a clunker built in late 2015. “It wasn’t till another year when I dismantled the first machine and built a sleeker second one.” 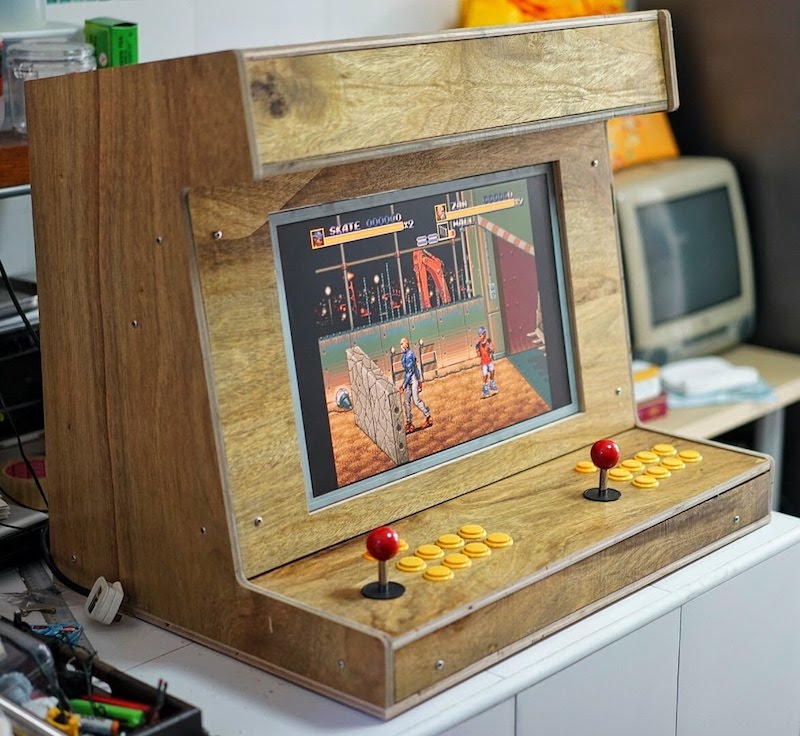 Having some rudimentary knowledge in 3D design software, it didn’t take him long to pick up AutoCAD and adequately draw up the models for his cabinets. The blueprints would be sent over to a factory he works with, which would then produce the pre-cut wooden panels for his attendees to fix up the cabinet.

Electronics, however, were a bit tougher to master. 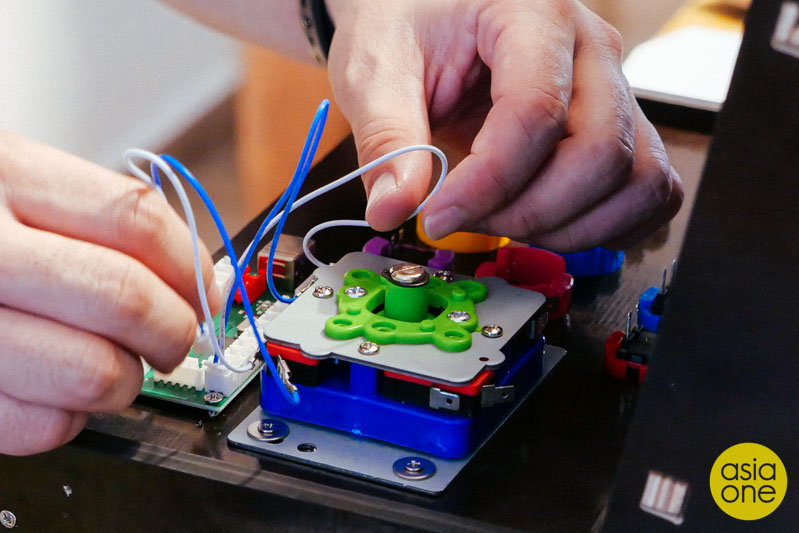 “The wiring for the buttons were a mystery to me,” KJ laughs. “I had to buy a full joystick controller and dismantle it just to see how it was done.”   Despite the dozens of clients he receives regularly in his workshops, the man insists that RetroCade is purely a hobby. 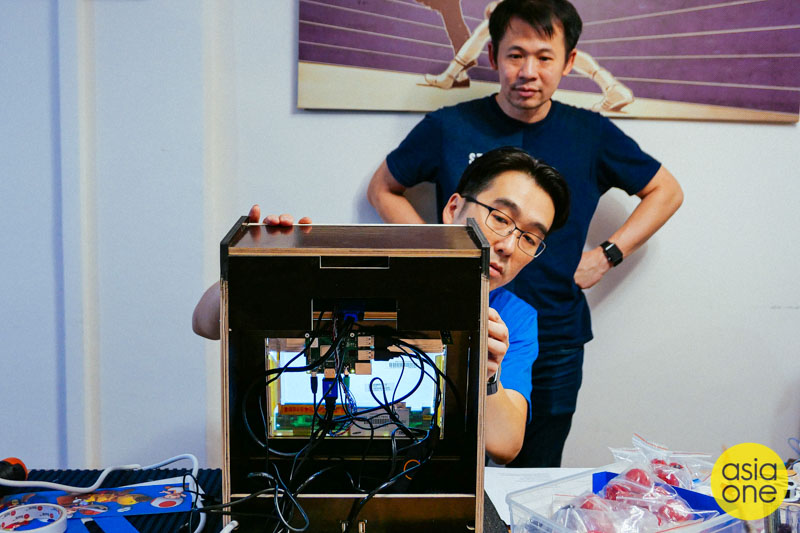 “I don’t actively seek out clients. I mainly maintain a FB and IG page, and people find me through there.”

There’s no doubt about the demand for retro gaming experiences, as KJ found out. Japanese fast-fashion retail giant Uniqlo took on RetroCade to build some custom arcade machines as part of a launch of their Marvel Retro Gaming collection. Hipster holdouts Chye Seng Huat Hardware and White Label Records have their own RetroCade machines for customers to play on. Even academic institutions are getting into the game, with Dunman Secondary School, Ngee Ann Polytechnic, and the School of Science and Technology hosting KJ’s workshops.

UPDATE: THANK YOU FOR YOUR PARTICIPATION, WINNERS WILL BE ANNOUNCED ON MONDAY, 18 NOVEMBER To celebrate Marvel’s 80th Anniversary, we’ve launched Marvel Retro Gaming UTs! Also, stand a chance to win a Tabletop Retro Arcade Machine we worked on with @retrocadesg, worth $900! Click on our bio link for more info! How to enter: 1) Visit UNIQLO VivoCity or UNIQLO Orchard Central 2) On Instagram, upload a photo of yourself playing the arcade machines 3) Tell us what you love about retro games and Marvel 4) Hashtag #MarvelRetroGamingUT and #UniqloSG 4 lucky winners will be chosen to bring home the exact customised tabletop retro arcade machines currently displayed at UNIQLO Orchard Central and UNIQLO VivoCity. Contest ends 3 Nov. T&Cs apply. #UTWearYourWorld #ArtForAll #UniqloSG #Uniqlo #lifewear

Being able to accommodate for custom builds means that KJ has had his fair share of extravagant requests, though he tries not to commit to such projects. They’re just super tough to carry out. 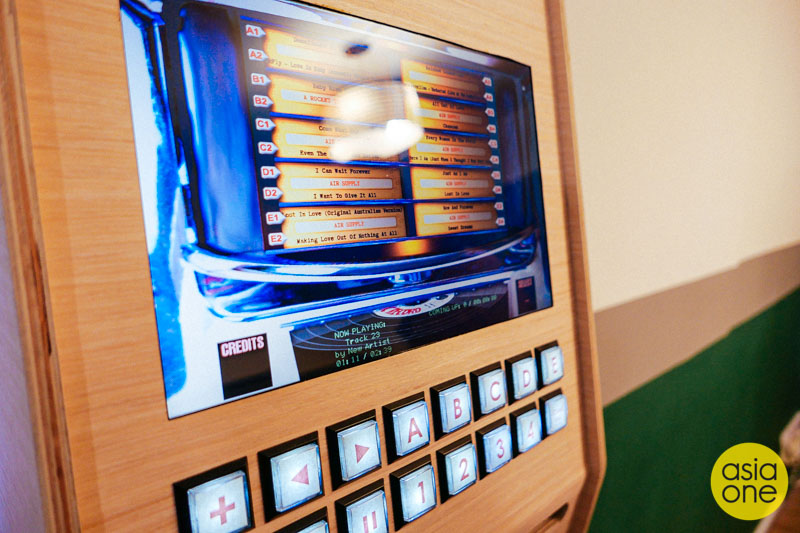 A digital jukebox that KJ built for himself. PHOTO: AsiaOne / Ilyas Sholihyn

“There were requests to build machines using 32” and 40” TV screens, but when we discussed the cost, the project was put on hold,” he revealed.

“The largest machines I’ve built use 27” screens. One was in the form of a standard arcade machine, while the other was a coffee table with a drawer to hide the joysticks. This was the largest order I’ve built, but also the most difficult.” 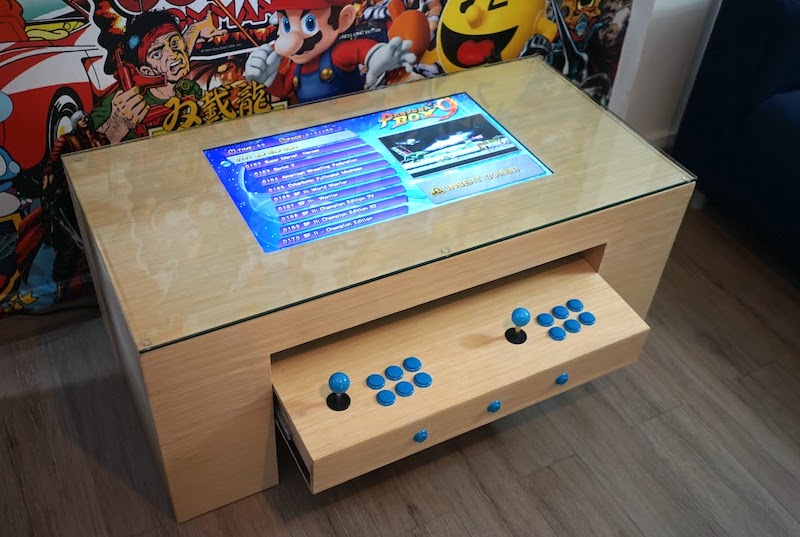 The coffee table with an inbuilt arcade. PHOTO: KJ

It’s a hobby, KJ insists, but it’s a bankable one. The kids who were hooked on video games have grown up to be adults with high disposable income, and what they want is to hit all the colourful buttons of nostalgia. The three other workshop participants toiling alongside us that day were all middle-aged men with kids, all of whom can’t wait to get their cabinets set up for a proper all-nighter gaming binge at home. 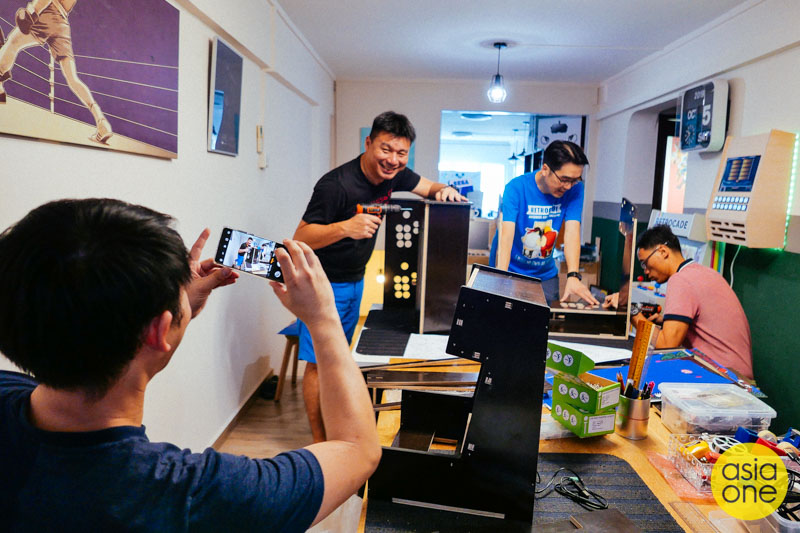 “I think most of us who grew up playing retro games finally have the money to play and own all the games and consoles we wanted,” KJ offered. “Most of my customers are working adults; some are parents.” 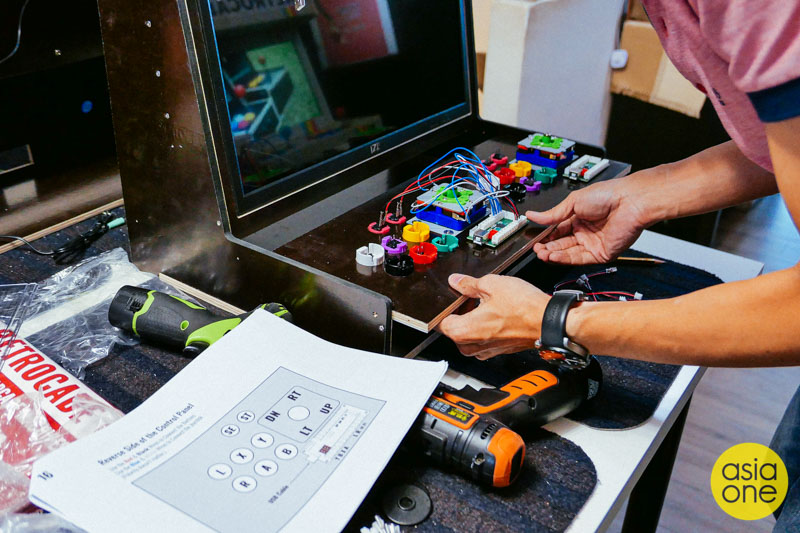 His arcade machines don’t just appeal to old gamers. RetroCade’s exhibition at this year’s GameStart Asia convention was a downright hit with kids — young ‘uns barely old enough to have experienced what it was like scrounging up enough money to get some tokens at TimeZone after school. 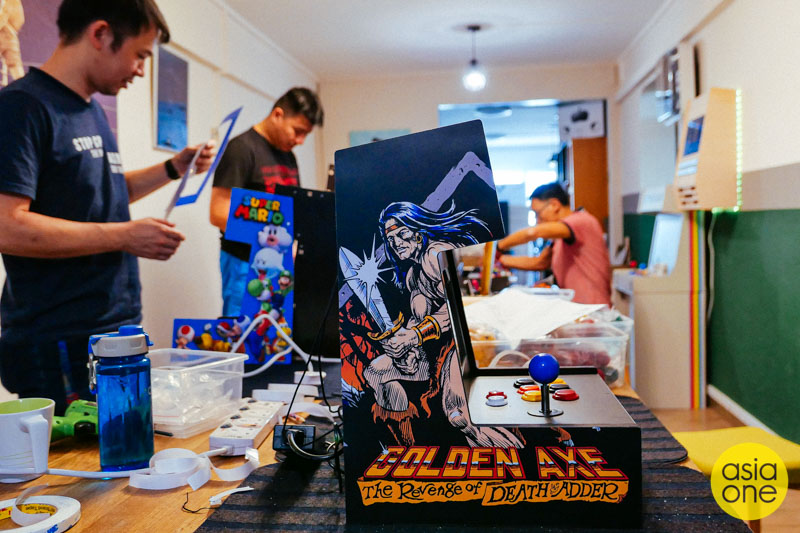 In a convention inviting folks to get hands-on previews of Final Fantasy 7 Remake and Marvel’s Avengers, it was KJ’s handiwork that sparked more than a little joy for the young and old. 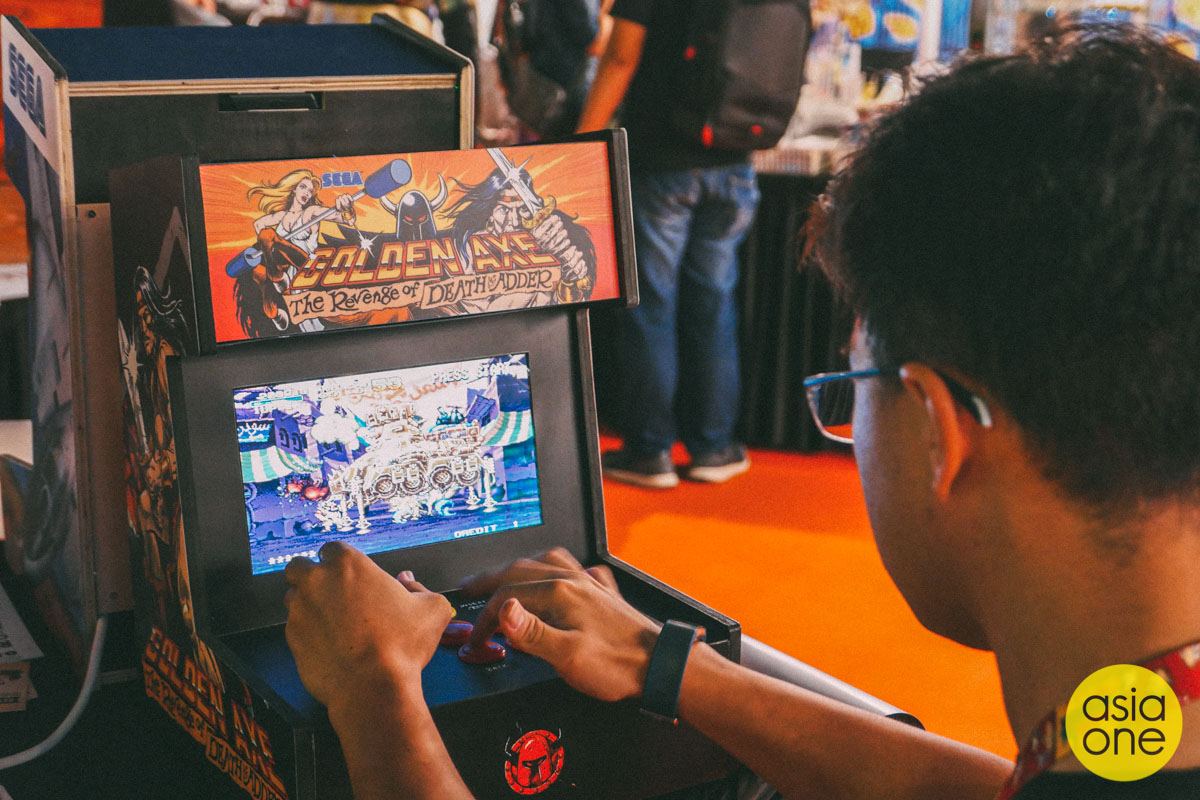 “There is a pick-up-and-play simplicity about them,” KJ pondered about the popularity of classic games.

“The games are simple enough to jump right in. Many of the modern games have a steep learning curve and require a huge time investment. With retro games, I can play for 15 to 30 minutes and enjoy myself.” 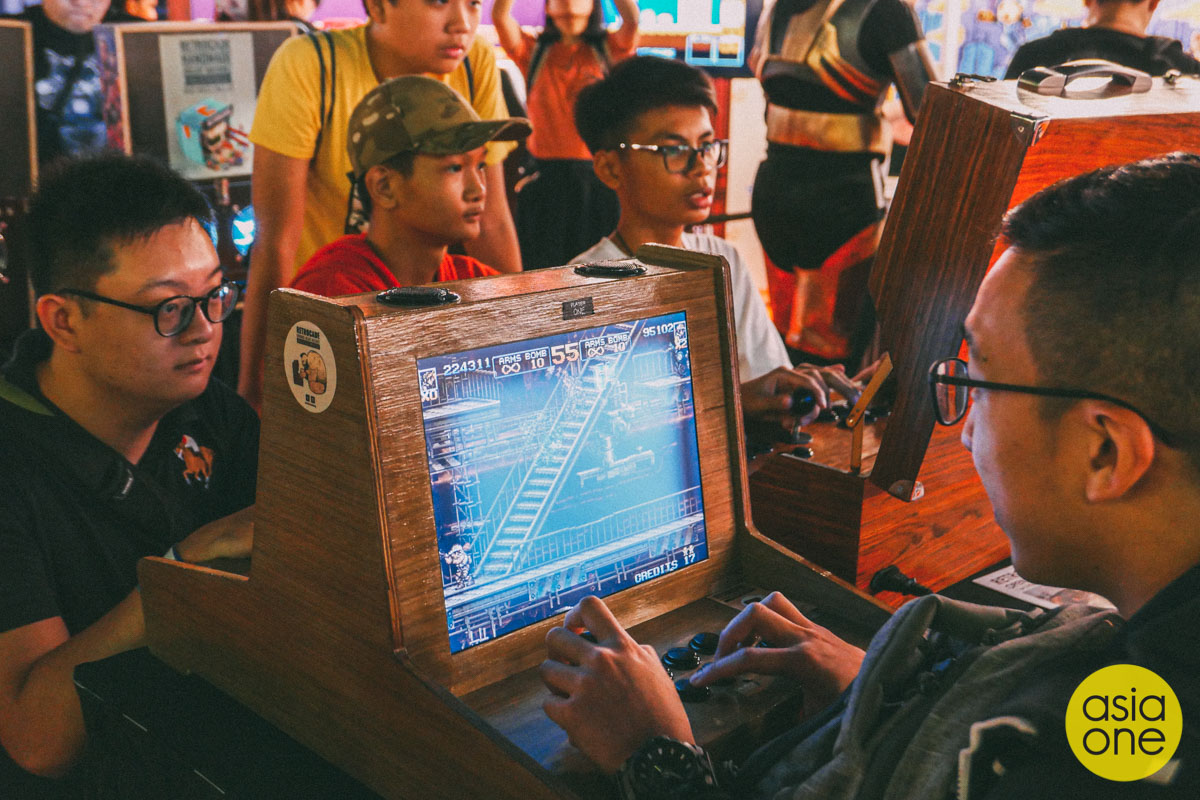 He also pointed out that the rise of indie games several years ago have shone the spotlight back onto pixel art, sparking even more interest in retro gaming.   In an age where couch gaming is an afterthought at best (Nintendo’s still at it though, bless them), what RetroCade wants to offer is the beauty of simplicity. 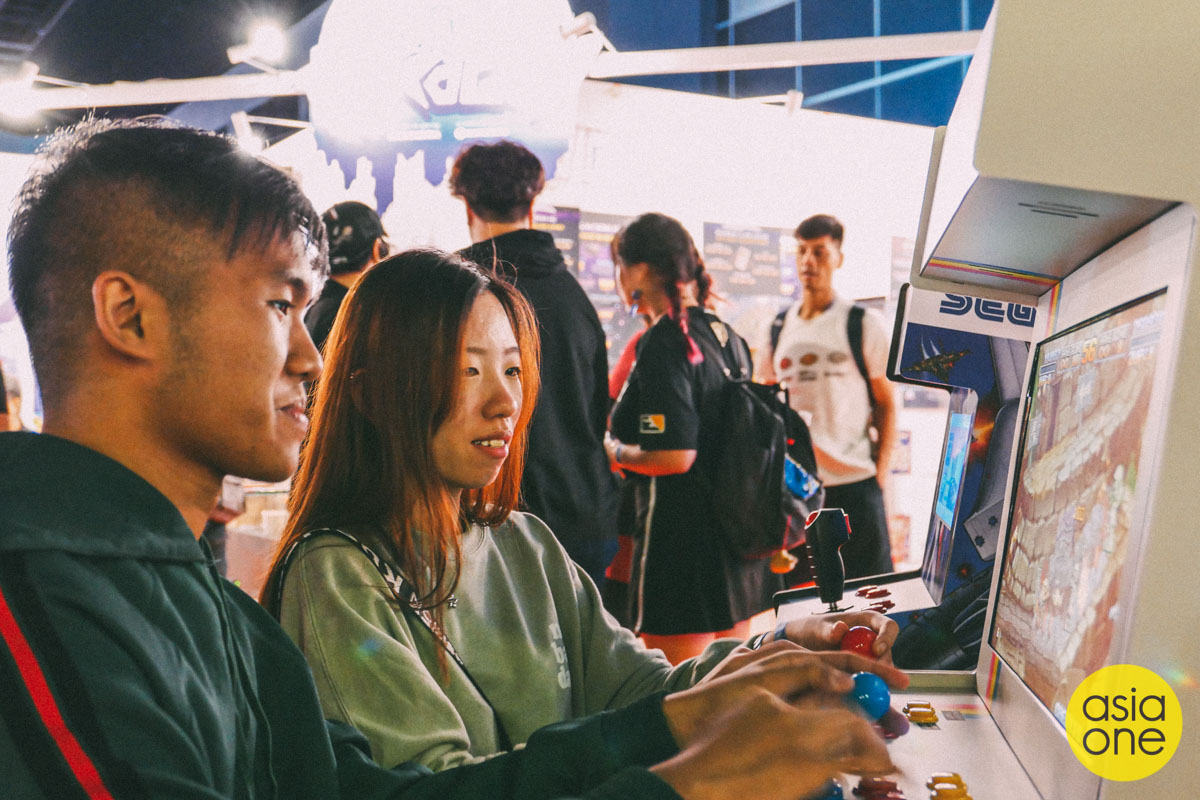 “There’s something very inviting about the arcade joysticks and buttons — it’s very intuitive, and the tactile feel is amazing,” KJ exclaimed.

“It’s more social in terms of real human interaction compared to modern online games. Nothing beats sitting side by side with your friends and trying to thrash each other over a game of Street Fighter.” 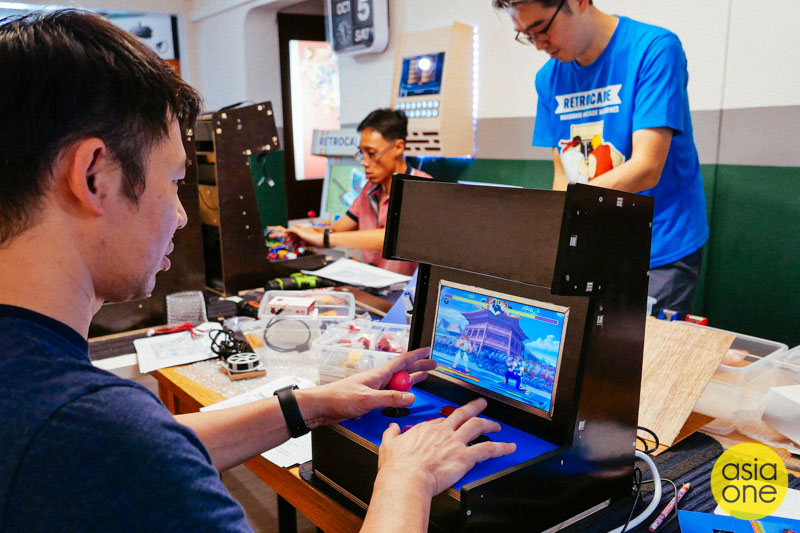