Laura Gonzalez has left her invigorating mix and match touch on each of these, conquering the French capital by transforming its legendary venues and masterminding original spaces from the ground up.

Named Maison&Objet’s Designer of the Year 2019, she is not shy about imposing her signature style – a daring blend of revisited classic references and plays of materials, fabrics, colours, patterns, textures, crafts and eras.

Combining multiple sources of inspiration, her artistic eclecticism imbues each of her projects with a soul. Believing that design is like fashion, where you have to mix things up, her interiors may be mismatched, but they work together.

A Star is born

Born in Paris in 1983 to a family of entrepreneurs in the hospitality industry, Laura was raised in Cannes. An only child, she followed her parents everywhere, from museums and auction houses to flea markets and antique shops. Constantly surrounded by Provencal arts and crafts, she regularly visited the Maeght Foundation, the glassmakers of Biot and the potters of Vallauris.

“From an early age, I was exposed to light, colours, cultural diversity and patterns daily, so it was only natural that, a few years later, I developed an appetite for interior design,” she says.

While still studying at the National School of Architecture of Paris-Malaquais, a friend asked her to design a boutique for custom-made shirts. This was followed by a couple of residential projects and then she founded Pravda Arkitect, her agency in 2008. Before even graduating, she won her first major commission at age 25: Bus Palladium, an iconic Parisian nightspot.

As luck would have it, all the renowned architects had left the capital for the Christmas holidays, so she was given three months to renovate the three- storey space that spans some 7,000 sq ft. Undaunted, she worked day and night, married different patterns, installed secondhand furniture and made brass fashionable again.

It was the beginning of Laura’s style – then inspired by Dorothy Draper, Gio Ponti and Josef Hoffmann – and a meteoric career. The offers succeeded one another, and the decorator proved that she had the talent to work on a wide variety of projects.

ALSO READ: Ask an interior designer: What are the best materials for a countertop, and everything else about the kitchen

At La Gare, a restaurant in Paris’ 16th arrondissement, she was inspired by the Mediterranean, combining colourful wooden chairs, green zellige tiles made in Fez, oversized patterned lanterns, a central banquette adorned in ikat fabric and panoramic Zuber wallpaper.

Meanwhile, at Laperouse, a Parisian institution, she respected the spirit of the 18th- century residence, restoring the historical woodwork and frescoes on the walls and ceilings while adding a quirky, romantic touch using silks and damask and chairs with feminine curves.

In 2019, she designed the Cartier Place Vendome boutique as an actual Parisian apartment – a delicate, feminine showcase where she confronted raw and precious materials, crowned by Cartier’s trademark panther featured as a bas-relief motif in the decor.

Whether revamping a piece of history like the Alcazar restaurant in Paris or starting from a blank slate such as the Christian Louboutin store in Barcelona, Laura surrounds herself with the best French artisans, including marble workers, cabinetmakers, glass-blowers and mosaic or lacquer specialists.

She has always been enamoured by the French tradition of decorative arts, exclaiming, “I love everything about them! They are at the very heart of my creative process.

ALSO READ: Singapore designer Olivia Lee on luxury as the measure of quality

''We are very lucky to have such an extraordinary pool of craftsmen in France and to be where so much savoir-faire was born so many centuries ago. I am on a constant lookout for discoveries to include in my projects. I go almost every week to the Paul Bert Serpette and Chatou flea markets, and I attend the auctions.”

Today, employing a team of 20 people, and never wanting to repeat herself, Laura searches out ambitious new projects. “My style doesn’t cease to evolve and to go towards the unknown, where I feel challenged and stimulated, to come up with creative and aesthetic responses,” she notes.

“However, I remain loyal to some basic aspects of my creative DNA while twisting them according to the client’s brief and my inspirations of the moment.

If a client has decided to work with us, it’s because they see themselves in the work we have completed over time. We share the same aesthetics and sensibilities.

“The most important part when a client calls upon us is the research we have to initiate. Before we even start to draw or imagine anything, we have to fully grasp the project’s codes. We also read many books related to the region and stories around the project’s area, see a lot of images in beautiful books and get inspired by magazines.

“As many of my projects are abroad, I try to mix the local codes – through local craftsmanship, for instance – with France’s unique savoir-faire and our office’s vision.”

Laura’s latest challenge? Expanding her eponymous furniture line. When unable to find the pieces she needed to meet the needs of her interiors commissions, she designed them exclusively for each project herself.

In 2017, to make them available to a broader audience, she launched her furniture collection manufactured in partnership with craftsmen in France, Portugal, Italy and Spain, who have shared her universe for years.

Read Also
Art of living: How these 9 homeowners in Singapore showcase an extension of themselves through their living spaces 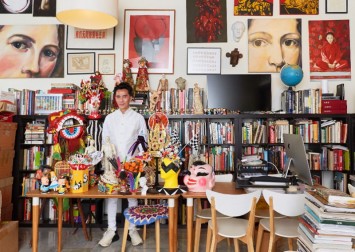 Her creations include the ultra-comfy, 1970s-inspired Soho armchair in cream mohair velvet, the Madras and Pondichery chairs in glossy, lacquered wood that are inspired by 19th-century Indian painted wood pieces, the Mawu oak chair upholstered with ivory boucle wool, the raspberry-coloured Casa mohair velvet sofa, the Bermuda triangular coffee table with an amber top and braided bronze legs, and a backgammon table in green, cream and amber onyx marquetry with cylindrical Plexiglas legs.

Attentive to craftsmanship, she worked with the ceramicist Jean Roger on the whimsical Bosphore lamp and sculptural candleholders, with lighting brand Crealum’in on the Lilypad chandelier in green textured glass, with Anne Midavaine and Rinck on the Nenuphar dining table with lacquered top and chunky wooden legs, and with Pinton on the silky, luminous wool and Tencel rug.

“Craftsmanship is inseparable from a large part of my work; it is the accomplishment of an exchange and a meeting between the worlds of each craftsman and mine,” she states.

“I love imagining pieces with them. It is a real and stimulating collaboration that respects the codes and skills of each one of us, while allowing us to make them our own and innovate.”

Currently working on a Cape Town resort, a luxury hotel in Rome, a cabin in the mountains, the Cartier New York and Chengdu boutiques, various Parisian restaurants and a private art club in London, Laura’s obsession is the head-to-toe renovation of the magnificent Saint James hotel-club in Paris, from the rooms and lobby to the restaurant and spa.

She chose to emphasise the neoclassical beauty and references to Greek antiquity of this building initially constructed in the 19th century as a private mansion while fusing the hotel’s romantic spirit with its soul of a gentlemen’s club.

The legendary library bar is immersed in an intimate English-style atmosphere featuring velvet, wood panelling and subdued lighting, and a pergola in Versailles green was built in the garden completely redesigned by landscape architect Xavier de Chirac. Based on a palette of four colours, from cream to celadon green, the rooms evoke a collector’s apartment with books and artworks.

The spaces are punctuated by bespoke furniture and examples of French craftsmanship, such as plaster chandeliers by sculptor Patrice Dangel, while an indoor swimming pool has been created for the Guerlain spa.

Laura concludes, “For the future, I want to be surprised and challenged in all my projects, and get somewhere I have never been before.”

ALSO READ: 5 iconic furniture designer names you need to be familiar with