Nothing can keep Jeremy Chew apart from the orangutans at the Singapore Zoo, not even a bad traffic accident.

The Deputy Head Keeper of Great Apes at Wildlife Reserves Singapore (WRS) joined the Zoo in 1997 and has looked after the orangutans since then.

But in November 2004, Jeremy was involved in a traffic accident and had to stop working. His doctor wasn't sure if he could walk again and it took Jeremy almost four years to return to his normal life without requiring crutches or a wheelchair.

However, according to him, "the call from the wild was too hard to resist" and almost seven years after his accident, he rejoined the Zoo in October 2011.

So it's no surprise that he says his family consists of not only his wife and daughter, but also the "many hairy kids at the zoo" – referring fondly to the orangutans. As the 46-year-old puts it, "every one of them has a distinctive personality, they are so like humans and you can't help but fall in love with all their little quirks".

He recalled that his first day of work after his accident was an emotional one. Anita, one of the adult female orangutans he had taken care of since he joined the Zoo, took one look at him and immediately came over to hold his hand.

It took Jeremy a year to build a strong bond with Anita and it's a mutual action of gaining the other party's trust and respect. "Once the trust and bond is established, we become like family or friends to them", he said. "Seven years had passed but she (Anita) still remembered me. The bond was not broken." 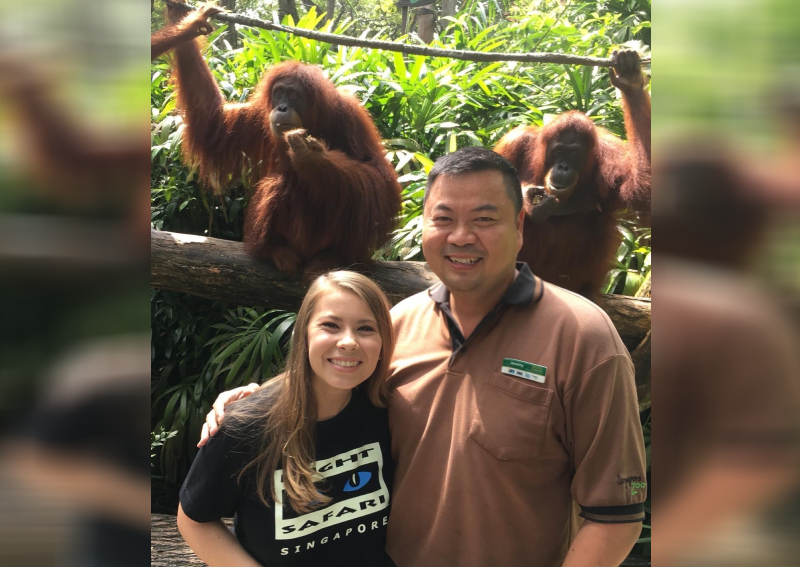 Jeremy with Bindi Irwin in a photo taken before the circuit breaker. PHOTO: Wildlife Reserves Singapore

When people think of essential service workers during the circuit breaker, most would think of healthcare professionals who are fighting at the frontlines.

However, Jeremy represents another group of people who still have to go out to their workplaces to help others survive, in this case, the animals at the Singapore Zoo.

With over 15,000 animals across four wildlife parks, WRS has a team who are working onsite daily to ensure all animals are well taken care of, even during the circuit breaker period.

Jeremy gave AsiaOne a sneak peek of what goes on behind the scenes during the circuit breaker period and what zookeepers have been up to while visitors are away.

Jeremy told us, "while work remains the same essentially, it's also a very surreal experience in the sense that we have never ever been in this kind of situation before". For his team, they have been divided into two rotating shifts.

"It is a bit of a gruelling schedule but we also constantly keep in touch with the other team to ensure everyone knows how the animals are doing", said Jeremy.

But first, let's clear some things up.

What exactly do zookeepers do?

Jeremy shared that the biggest misconception about his job is how many people think it is a "dirty, hard labour job", which only consists of feeding and cleaning up after animals.

Contrary to popular belief, besides their physical and nutritional care, zookeepers are also in charge of the animals' mental health, coming up with activities to make life more interesting and challenging for the animals. 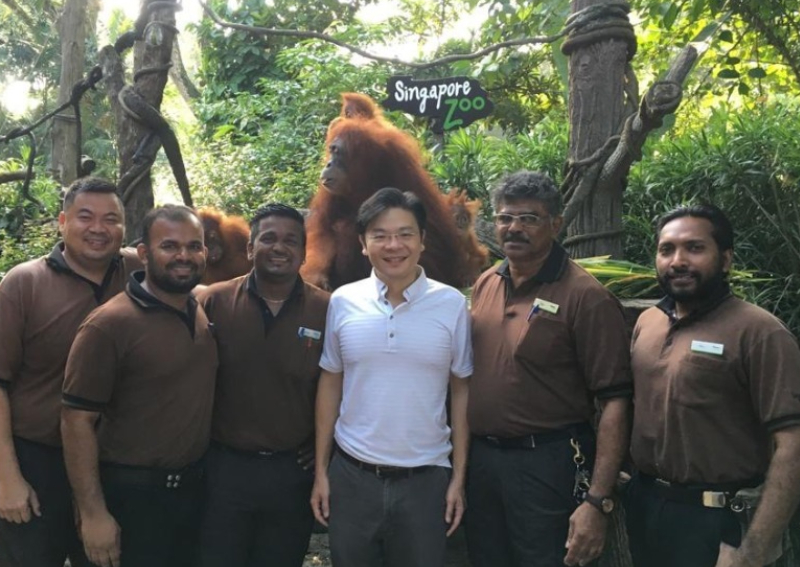 Many zookeepers conduct observational studies on the animals and even write research papers, which are presented at zoological conferences regionally and globally.

For Jeremy, his responsibilities are to ensure that the animals' welfare are not compromised in any way. The exhibits and facilities under his care also have to be well-maintained.

What a typical day for Jeremy is like during circuit breaker

Jeremy, who mainly looks after the orangutans, gave AsiaOne a glimpse into his daily routine in these circuit breaker times.

Due to the Covid-19 situation, extra precautions have been put in place to ensure the safety of all staff in WRS. Staff have been provided with protective gear such as gloves and masks, and are required to have their temperatures taken twice, daily.

It's not just the staff who have to go through these checks. Even the 21 orangutans in the enclosure are required to take their temperatures twice a day, at 8am and 5.30pm.

And in case you are wondering how that's done, Jeremy uses a forehead-scanning thermometer, whereby a temperature of more than 37.5 degrees Celsius would indicate a fever for the primates – not so different from us humans. 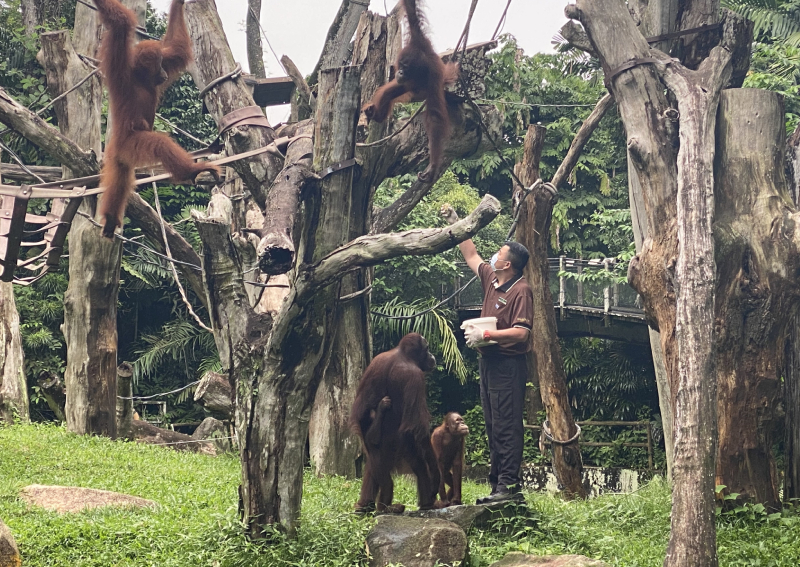 After taking their temperatures, Jeremy will then give the orangutans their morning feed and check the cleanliness and safety of the exhibits before releasing them.

Other duties include preparing their food, cleaning their dens and providing "enrichment" activities to stimulate their minds. At the end of the day, he will conduct a final headcount check before heading home.

While zookeepers may not be the first thing that comes to mind when people think of essential service workers, there is no doubt that their work is just as important.

Besides the keepers who ensure that the animals are kept safe and well-cared for during this circuit breaker period, there are also support staff onsite to maintain the infrastructure, equipment and systems for the safety of staff and animals.

At present, WRS and its four parks – Jurong Bird Park, Night Safari, River Safari and Singapore Zoo – have not indicated when they will be reopening its doors to visitors.

However, measures such as enhanced disinfection at high touch point areas and safe distancing are likely to continue to be in place when it reopens, said Jeremy, so that guests can have a safe and enjoyable experience.

How are the animals faring?

Despite the sudden dearth of visitors to their enclosures, the animals appear to be faring pretty well – you may have seen the adorable online video of African penguins waddling about the Singapore Zoo during its closure.

Will we see more clips of animals and their escapades? Perhaps, according to Jeremy.

"If it's something that will result in a positive impact and we can safely carry out the activity, you can be sure the keepers will try it", he explained. 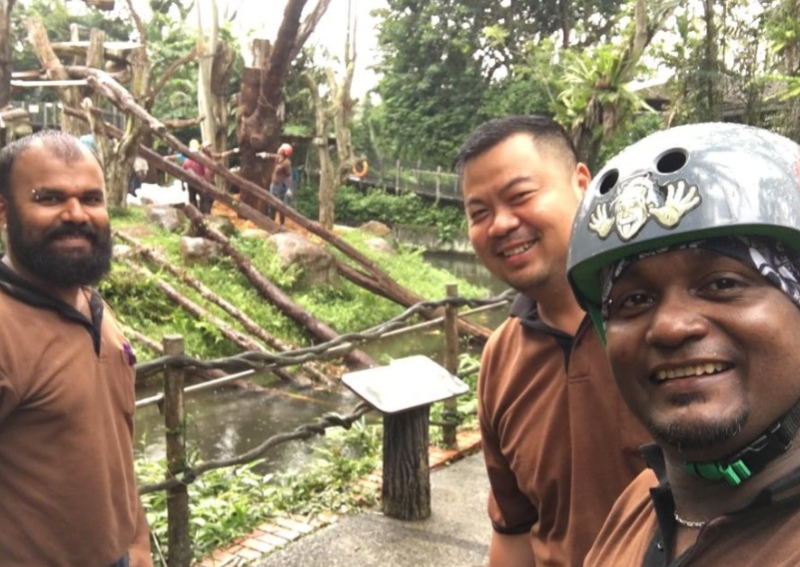 Jeremy (second from the right), with his colleagues Prakash Naidu (extreme left) and Kumaran Sesshe (extreme right) in a photo taken before the circuit breaker. PHOTO: Wildlife Reserves Singapore

When the keepers take the animals out of their exhibits, they'll have to think about the animals' safety and how it will affect them.

According to Jeremy, while some animals have been confused as to why their routines had changed, they were quick to adapt.

For example, the orangutans that his team used to bring out for the Jungle Breakfast segment kept looking towards the breakfast and free-ranging areas, wondering why they were no longer being brought there. But they returned to playing, exploring and interacting with each other after just a couple of days.

To Jeremy, taking care of the orangutans is considered more of a lifestyle than a job, noting that he probably spends more time with them than his wife. "It's a unique work environment – where else in Singapore can I get to work with orangutans?" he said.

ALSO READ: Get Out!! Have breakfast with orangutan Ah Meng's granddaughter at the Singapore Zoo