Cooking, playing the guitar: Politicians and their hidden talents you never knew

Politicians are just like you and I, when they're not having their hands full with state affairs. They too, take time to wind down by doing things that they love — apart from politics.

We stalk our politicians' Instagram and Facebook in an attempt to find out more about their personal interests and are surprised by some hidden talents which many may not know about.

Here's a look at politicians and their lesser-known skills:

I told the Founders Forum two weeks ago that the last computer program I wrote was a Sudoku solver, written in C++...

Apart from speaking in different languages effortlessly while addressing the nation, our Prime Minister (PM) has another talent that not many might know of.

Back in 2015, PM Lee shared in a Facebook post that he had coded a Sukudo solver, a game solution "written in C++ several years ago".

That comes as no surprise as PM Lee had graduated with a B.A. in Mathematics and a diploma in Computer Science from the University of Cambridge.

On my way back to Penang, we stopped by some paddy fields in Kedah. Kedah supplies more than a third of the rice consumed in Malaysia - no surprise then that it’s known as the ‘rice bowl’ of the country!

If you think PM Lee is the only minister we have that knows computer coding, Vivian Balakrishnan, Minister for Foreign Affairs, is also another who's well-versed in it.

He successfully translated PM Lee's Sukudo solver from C++ to Javascript and you can have a go at the game here.

Besides coding, Dr Balakrishnan, the Minister-in-charge of the Smart Nation Programme Office initiative, is also an enthusiast at assembling his own unique watches, buying different watch components and putting them together. 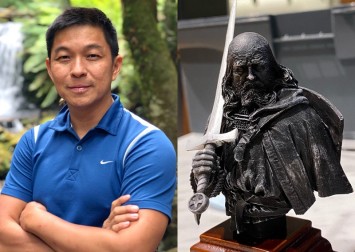 During the CB period, Tan Chuan-Jin revealed his geeky side, showing off his painted miniature figurines on his social media platforms.

While most Singaporeans were cooking and baking, Tan spent his time assembling and prepping his miniature figurines for painting, including a Spartan warrior and the last Grand Master of the Knights Templar.

This isn't the first time he has professed his love for plastic modelling. Tan used to build model tanks and aircraft, which led him to be interested in military history and history in general.

Bradley Bowyer, a former member of the PAP and opposition People's Voice party, is one of the six candidates contesting under the Progress Singapore Party (PSP) for the next GE.

Before entering politics, Bowyer shared that he'd always been fond of theatre, and had been on stage since he was just six years old, though he added that he prefers to be working backstage — more specifically, making props.

And knocked out a quick steampunk eye patch

Bowyer posted photos of the props he has made and they are rather impressive. The props appear to have been featured in Universal Studios Singapore's Halloween Horror Nights in 2017.

Welcome to our witchdoctor shop

Can you guess where this bridge is? #HomeLivePlay #PRPG

Who knew that our Senior Minister Teo Chee Hean actually has a keen eye for aesthetics? If you scroll through his Instagram feed, you'll be pleasantly surprised to find nicely taken photographs of nature.

We're not sure if it's accidental or if Teo is actually trained, because some of these mood shots are giving us major feels, like this sunset juxtaposed with pigeons.

Cooked a Thai dinner for her birthday meal as that’s her favourite. #happybirthday #wife

Baey Yam Keng is an MP representing Tampines GRC, and if you follow his Instagram account, you'll see that it is populated with fitness routines, perfect selfies, and most recently, cooking recipes passed down from his mother.

During the circuit breaker, Baey has shown himself to be a family man who can cook, and has effortlessly dished out chicken rice, Thai food, winter melon soup, you name it — is there anything this MP can't cook?

I thought I liked mince pies. Then I made some from scratch and will never go back to store bought ones again omg

Youth wing secretary of WP, He Ting Ru, puts us 'circuit bakers' and chefs to shame with her drool-worthy homecooked meals.

She makes her food from scratch, including pies, pasta and pizzas, and they absolutely look like they're store-bought.

If you find Daryl David familiar, that's because he was a television personality and appeared in local productions like Happy Belly. He was also a host for The Pyramid Game and a poly lecturer, before becoming MP of Ang Mo Kio GRC.

He told Today that his interpersonal skills were acquired from being in the media and communications industry and they have helped him in the political arena.

Unless you've been living under a rock, Minister for National Development and Second Minister of Finance Lawrence Wong has been at the forefront of addressing the nation about Covid-19 and Singapore's reopening.

On less serious occasions and casual events, Wong has been seen performing with a guitar, belting out popular tunes.

Wong said on a Facebook post that he used to play the guitar often when he was studying in the US and even busked on the streets. While he doesn't play so often these days, he'll still strum some tunes as a form of relaxation.

Despite everything that's going on, it's still a wonderful world.

Lawrence Wong isn't the only crooner it seems.

During this stay-home period, Singapore Democratic Party's (SDP) Chee Soon Juan took to Facebook to perform a number, reminding Singaporeans that "despite everything that's going on, it's still a wonderful world".

ALSO READ: Got game? Let this millennial review some of our politicians' Instagram accounts