As part of Singapore's effort to tackle the spread of Covid-19, it is mandatory to wear a mask for everyone leaving their homes.

Though it seems that some didn't get the memo.

On Monday (July 5), a female supermarket cashier was accused of not wearing a mask while working.

The woman was an employee at Hao Mart in Block 658 Punggol East, according to a Singapore Uncensored reader.

The netizen – who was visiting the store – had reminded her to put on a mask but she refused to do so, ignoring the customer and walked away, roaming the supermarket.

The netizen pointed out that there were other customers at the time and most complained about her lack of a mask.

According to Lianhe Zaobao, residents in the area said that Hao Mart has been open for around four or five years and is a vital source of everyday supplies as well as fresh fruits and vegetables.

A 37-year-old resident at Block 658C told the Chinese daily: "I go to the supermarket practically every day to get something, I didn't meet any staff who deliberately avoided wearing a mask."

Another resident living in Block 659 goes to the supermarket several times a week.

The 50-year-old woman said: "We are very familiar with the staff. I think there are only two or three cashiers but I've never met one who didn't need to wear a mask."

Read Also
'If you have no badge, why are you asking me to do something?' Woman at MBS who refused to wear a mask being investigated 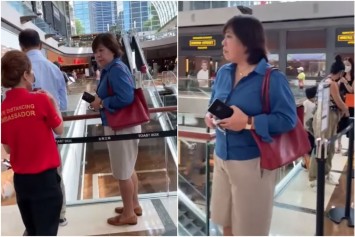 The supermarket has apologised for this incident and has let the staff member go after investigation, according to queries from the Chinese daily.

A supermarket spokesperson said that they are aware of the incident and that, after further investigation, they discovered that the female cashier had violated the company's policy on wearing a mask properly at work.

The spokesperson added they wish to apologise for this incident, and that they have also conveyed their apologies to affected customers.

The spokesperson also said that the cashier had initially been warned when they discovered she had taken food from the supermarket to eat.

The employer has decided to terminate her employment as a result of these two instances.

In addition, the company will review their current measures and will implement stricter punishments. Staff will also attend additional training on pandemic prevention measures.

This is not the first time such an incident has occurred in Singapore.

Recently, Briton Benjamin Glynn appeared at a district court on July 2 after being caught on camera not wearing a mask in an MRT train last month. Following the viral video, he was charged with three counts, including harassment.

The infamous MBS woman who challenged a safe distancing ambassador (SDA) in a viral video clip in May was charged with multiple counts of similar offences under the Covid-19 (Temporary Measures) Act.