It's none other than Workers' Party's former chief Low Thia Khiang, who's been recovering from a fall at home in April.

While they occupy different seats in Parliament, that hasn't stopped the Speaker and the longest-serving opposition MP from striking up a friendship.

In a Facebook post on Tuesday (June 23), Tan wrote that he has "kept in touch with Low since his fall” and is “glad to see him in good spirits and recovering”.

He paid Low a visit at his home with some pears and durians and the pair had a nice long chat over tea and bak chang (rice dumpling).

#GuessWho? Glad to see Mr Low again. Have kept in touch with him since his fall and am glad to see him in good spirits...

Low, 63, injured his head from a fall on April 30. He was warded in the intensive care unit for five days, and later discharged from Khoo Teck Puat Hospital after a 21-day stay.

Although WP chief Pritam Singh has been sharing updates on Low's recovery, this may be the first time the latter has shown his face since his fall.

In the wefie with Tan, Low appears to have lost some weight but remains in good spirits.

Facebook users commended the display of "friendship between gentlemen" even though the men are from different political parties in Singapore. 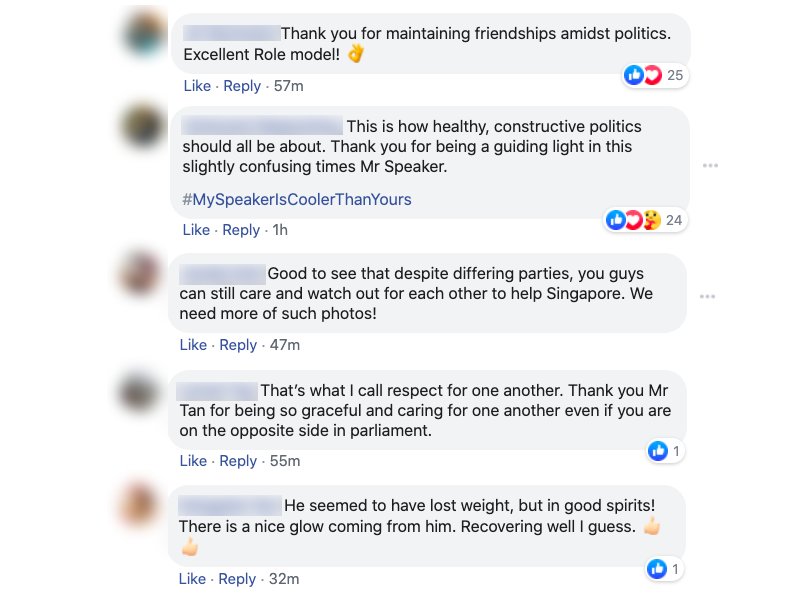 And netizens appear to have caught on Tan's penchant for donuts and asked if he treated Low to his favourite snack. With the latter still in recovery, however, the donuts would just have to wait.