Now that the cat's out of the bag — the upcoming general election will be held on July 10 — the first question that comes to most of our minds are: Wait, do I have to vote?

To cut straight to the chase, if you're a Singaporean citizen that's 21 years of age (or older) as of March 1, 2020, you must vote in the upcoming election. Yes, voting is compulsory; it is not an option.

Why March 1, 2020? That's when the Registers of Electors (a list of names of eligible voters) was prepared.

Hence, even if you were to turn 21 before polling day on July 10, you'd have to wait till the next election to cast your vote if your birthday is after March 1, 2020. 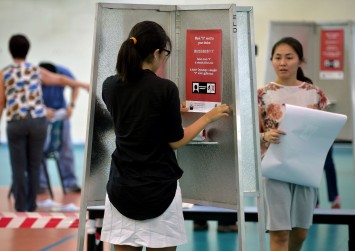 You should not be disqualified from being an elector under prevailing law.

For those who have recently moved, there's a chance that you might have to vote in your old constituency if you didn't manage to update your address.

The fastest way to be sure if you need to vote would be to head on to any one of these places:

Is there a chance that I won't need to vote if I'm a registered voter?

1. There's a walkover in your constituency

In cases where there's only one party nominated for your constituency, it's not as if there's anyone else to vote for, so that party wins by default.

Which means you can sit back (enjoy the public holiday) and avoid heading down to the polling centre.

2. You've been removed from the Registers of Electors

If you have forfeited your vote, for any reason, in the past election, your name would have been removed from the Registers of Electors and therefore you would not be allowed to vote.

You can, however, submit an appeal to the Registration Officer to have your name restored. This can be done online via the Elections Department (ELD) website or over the counter at any community centre, or at ELD itself.

If a non-voter does not have a valid reason for not voting, they will have to pay a fee of $50.

Even if you know ahead of time that you are unable to vote in the upcoming election, you can pre-apply for your name to be restored to the registers at the same places stated above. Your application will be processed after the non-voter list for the upcoming election is collected.

Should circumstances change and you are able to make it to the polling station, go ahead and cast your vote. The system will automatically void your application.

Are you a first time voter or perhaps just not all too familiar with what happens during a general election? Click here to read about everything you need to know about GE2020.