"It's inevitable that you occasionally trip over words, especially when you're speaking off the cuff and with limited time", said Tan Min-Liang in a Facebook post just yesterday (June 30).

The Razer CEO was referring to the speech by Deputy Prime Minister (DPM) Heng Swee Keat on Nomination Day following his surprise appearance at the Nomination centre for East Coast GRC.

The DPM's speech has been the subject of multiple internet comments and memes since then.

Tan added that while it is easy to make comments when one is watching the speech, actually public speaking on the fly is not easy and even "the best of us will trip up occasionally".

Tan also spoke well of the DPM, recounting back to a time where Heng spoke at the groundbreaking ceremony of the new Razer headquarters in Singapore. "He pretty much ad-libbed his speech on the fly effortlessly then".

"I like the guy, I think he's smart, effective, and good for Singapore. We should appreciate the work he does and can do for the country. I would definitely vote for him if I were in East Coast," said Tan. 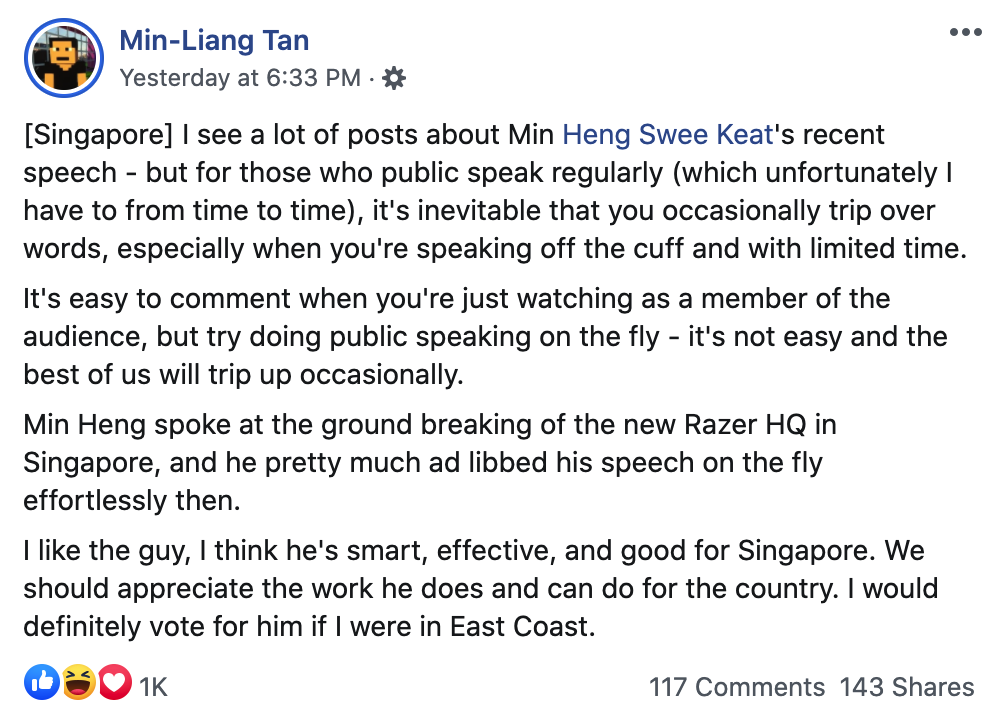 Heng, who was previously a Member of Parliament in Tampines GRC since 2011, has also explained his surprise move to East Coast GRC.

"We need a full team that can take care of the residents and position them to come out of this crisis stronger than before. I told PM (Lee), I will move to East Coast."

The face-off between the People's Action Party and Workers' Party in East Coast GRC has been noted by many as an interesting one to watch in this year's general election.