Following the uproar over People's Action Party (PAP) ex-candidate Ivan Lim, Shawn Huang is the next PAP candidate to bear the brunt of netizens' criticisms, with allegations made against him for "changing his surname" in order to contest for the upcoming general election.

Social media posts from 2015 and 2018 that were resurfaced showed Huang being addressed by the surname Ingkiriwang when he was still serving in the RSAF.

“Above all, I am a son of Singapore.” The Parade Commander for #NDP2018 is Lieutenant Colonel (LTC) Shawn Ingkiriwang!...

Congratulations to one of our very own, MAJ Ingkiriwang Shawn, who has been awarded the prestigious Lee Kuan Yew...

Posted by The Republic of Singapore Air Force on Friday, May 29, 2015

Another Facebook post also claimed that the 37-year-old changed his surname as he is "ashamed of his Indonesian-Chinese roots". 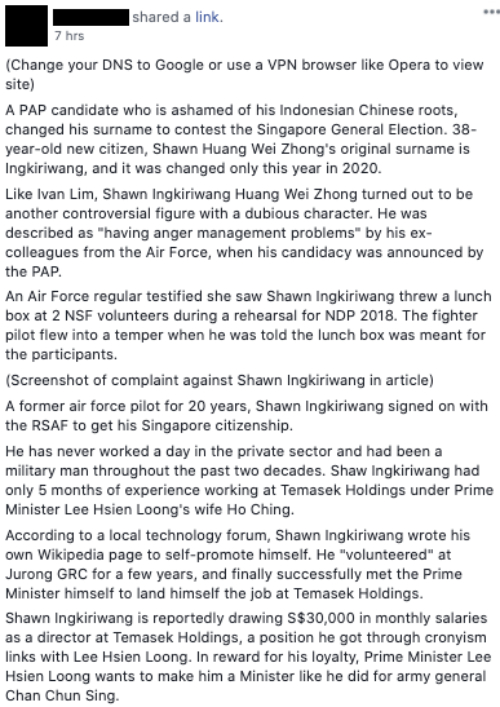 In a Twitter thread, activist Kirsten Han pointed out that a Wikipedia entry regarding Huang's surname had been changed by a person named Shawn Huang. However, she added that "there's no need to question what his 'real' race or nationality is".

In a reported doorstop session following PAP's unveiling of new GE candidates on Friday (June 26), Huang appears to have addressed the controversy.

When asked by a reporter about which name he prefers to be called, he replied, "Huang Wei Zhong Shawn", a name which he goes by "officially".

The former fighter pilot explained the history of his surname and said that his family name has always been Huang.

He added that his great-grandfather had to use the surname Ingkiriwang when he was in Indonesia but his parents decided to "stick to our heritage and roots, which is Huang".

Apart from the surname controversy, the director for enterprise development at Temasek International was also accused of throwing on the table a packet of food offered to him during rehearsals for the 2018 National Day Parade.

Huang has since stepped up to clarify the allegations in a Facebook post on Sunday (June 28) morning, calling it a "misunderstanding".