Following reports of illegal social gatherings at Robertson Quay last month, one restaurant in neighbouring Boat Quay has been slammed online after being accused of breaching circuit breaker regulations.

But the men accused of congregating at their establishment were simply customers waiting for their food, Sahara Bar & Restaurant told AsiaOne on June 2.

The men drew flak online after a Facebook user, one Richard Ang, posted photos of them in front of the restaurant in Boat Quay with their masks pulled down on May 31.

Two of the men appeared to be engaged in a conversation while standing at a bar table, one of them holding an unidentified beverage in his hand.

In his post, Ang claimed that he had walked past the group of men at 7.50pm. They were still at the restaurant when he passed by again at 8.55pm, he added.

Although he had already submitted a report via the OneService app, Ang also called the police as there was "no action," he wrote.

As Ang's post made its rounds on the internet, netizens called for the men and the restaurant to be punished. Some also questioned why the restaurant had placed tables "for congregating" outside its store. 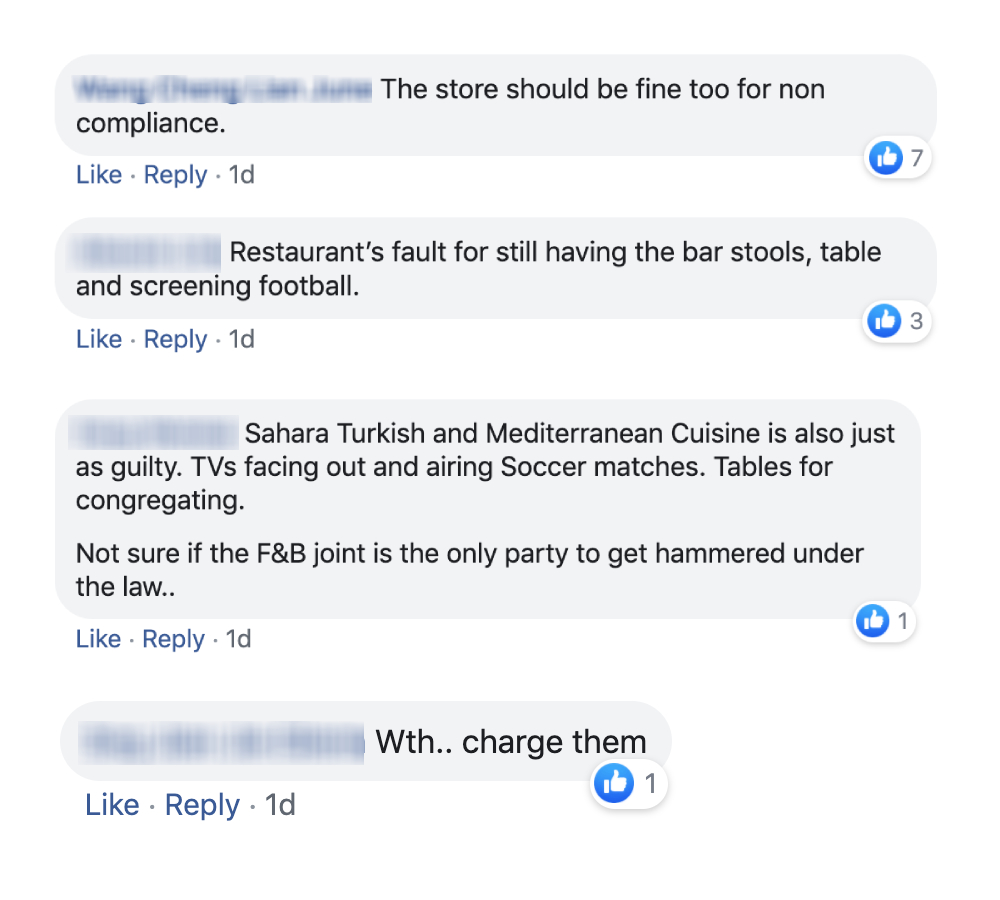 In response to AsiaOne's queries, the owner of Sahara Bar & Restaurant, who identified himself as Mr Esad, said that the men pictured were customers waiting for their food.

"As it was around dinner time on a Sunday, and orders were coming through on delivery platforms as well as walk-in, there was some waiting time required."

The alcoholic beverage that one of the men was holding was not from his restaurant, he said, adding that he had not served the men any alcohol.

The bar tables had initially been placed in front of the restaurant for the convenience of food delivery riders when they had to pick orders up, he explained. However, the tables have since been removed.

Esad also admitted that he was one of the men in the photographs shown not wearing a mask properly and explained that he had been drinking coffee at the time the photo was taken.

When asked about the other customers who appeared to have pulled down their masks, he said that the restaurant staff had spoken to the men about it.

According to Esad, there was "no problem" when the police visited the shop after the photo was taken.

AsiaOne has reached out to the police for more information.

According to the Ministry of Health, removing face masks while eating or drinking is permitted. However, the mask should be put back on immediately after a meal.

While Singapore has transitioned from its circuit breaker period to Phase 1 of safe reopening today (June 2), restaurants are still prohibited from serving dine-in customers.

Social gatherings and gatherings in public spaces are also not allowed in Phase 1.