'You don't know how to control traffic, right?' Notorious Bentley that pushed back security officer had allegedly cut queue

Queuing up is probably one of the first lessons taught in school.

But a man driving a white Bentley allegedly decided not to when he tried to enter Red Swastika School on Tuesday (Jan 11) morning.

The school's security officer attempted to divert him but the driver accused him of causing a jam outside the school.

A 72-second video of their verbal exchange has been circulating on social media, with one Instagram post garnering over 21,000 views and 29 comments.

In the clip, the driver appeared to avoid queuing up on the left-most lane so he took the second lane before turning in to enter the primary school in Bedok.

A security officer halted the car and told the driver "there is no excuse" for his actions.

"That's why I say you don't know how to control the traffic, right?" the Bentley driver bit back. 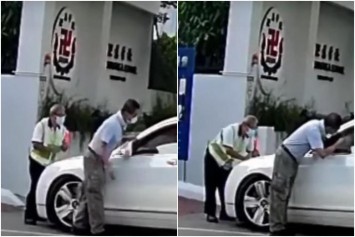 He continued to argue with the security officer after exiting his car. The latter stood his ground and did not budge.

The altercation between the two men continued before the person who filmed the incident yelled at the driver: "Queue up lah. Come on man, you are parents.”

According to Zaobao, the Bentley driver is the grandfather of a pupil of the school.

After he threatened to run down the security officer, the police arrested the 61-year-old driver for a rash act causing hurt.

The security officer, 62, sustained minor injuries and is recovering at home.

Education minister Chan Chun Sing said on Tuesday that the Ministry of Education is investigating the incident.