Carrie Wong thanks Lawrence Wong for being the 'bigger person', boyfriend shows his support

Actress Carrie Wong has publicly apologised to actor Lawrence Wong after being caught in one of Mediacorp's biggest scandals to date.

A leak of the actress' personal messages between her and actor Ian Fang has thrown them both in the spotlight after their steamy texts and private conversations were revealed in public.

In the midst of this, Lawrence found himself dragged into the mess after the chat revealed that the pair had spoken ill about him behind his back, to which he clapped back with an Instagram post.

While the Yanxi actor shared that Carrie has personally apologised to him for her remarks, the actress took it one step further by posting a public apology on her own Instagram page.

Thank you for being the bigger person. Despite everything you lend me your listening ear and offer me words of encouragement. I've learned and will keep learning. Once again, I'm sorry.

In a post made on Wednesday (May 15), Carrie shared a photo of the two who are currently in Bintan filming the drama My One In A Million together.

She thanked Lawrence for "being the bigger person" and "lending her a listening ear" to which the actor even offered words of encouragement after all the tea was spilled.

Her apology drew sympathy from her followers who expressed their support for the actress. Actor Desmond Tan reached out with some wise advice for the young actress.

The actress' boyfriend, Boris Lin, also reassured her with the note, "I will always be on your side". Earlier, the actress shared that she was grateful to him "for his trust".

OTHER CELEBRITIES SPEAK UP

Meanwhile, other celebrities also lent their support to actress Rebecca Lim, who's widely-rumoured to be Ian's current squeeze.

Celebrity hair stylist David Gan came out in support for Rebecca, dedicating a post (May 15) to her on his Instagram.

Queen of Caldecott, Zoe Tay also posted a sweet picture of the two on her Instagram yesterday (May 15).

The caption reads, "Life is all about attitude. Being poised will help you achieve greater heights. Your academic background determines your standard. How you treat others shows your magnanimity. The depth of your character defines you as a person." Her comment seems to take a dig at Ian's remarks about Lawrence, who insinuated that the latter relied on "on connections, looks, or luck."

She also posted this quote on her Instagram story, which reads "doing the right thing is more important than doing it right". That the leak was due to a lost phone seems to be the main conspiracy theory behind one of Mediacorp's juiciest drama yet.

According to Wanbao, in the series of messages exchanged between Ian and Carrie, the actress once complained about losing her phone. They theorised that the person who found her lost phone must have come across the conversation on their own and decided to leak it. 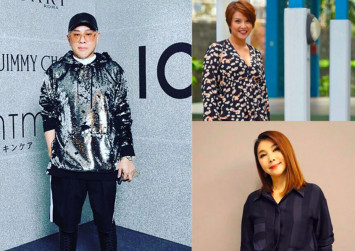 Another theory speculates that a hacker was behind the leak, by hacking Carrie's Instagram account. With recent cases involving local celebrities Instagram accounts, including David Gan's, this theory seems to be the most likely.

When asked by Wanbao if they were going to pursue legal action or investigate the cause of the leak, Mediacorp declined to comment.

#Local celebrities #Instagram #online influencers #In Case You Missed It