With the recent spate of violence in Singapore, do people still find our streets safe? An AsiaOne poll reveals

In both the Boon Lay (left) and Liang Seah Street (right) incidents, victims were slashed at and wounded by large, sharp objects.

This year has been a wild ride so far.

We're only a third through the year and already we seem to be suffering from what seems like a never-ending wave of violence.

Just this month alone, there was a brawl outside Katong Square, an attack by two men armed with long knives in a Boon Lay HDB carpark and a man who slashed his wife with a cleaver at Liang Seah Street.

Knowing all this, do you still feel safe walking along the streets of Singapore?

To better understand Singaporeans' perception of public safety, an online poll of 1,995 people was conducted by AsiaOne from April 18 to 20 this year.

The results found that two out of three surveyed (62.2 per cent) felt safe walking around their neighbourhood at night.

Among the respondents who shared their age and gender with us, about 10 per cent more of those under 18 years old (men and women) said they felt unsafe.

About five per cent more women said they felt unsafe.

In fact, in a Reddit discussion last week about the recent slashing cases, one user posted that the perceived increase in violent incidents could be a case of reporting bias, simply "because it's appearing more in the news, it appears to be more than previously".

The user wondered if it was because previously, we didn't have access to social media to document such incidents and the news outlets didn't publish similar cases previously.

"Probably the ones with the best view [are] the statisticians and police who have the stats (statistics) on the yearly crime rates," the netizen offered.

AsiaOne's head of research and analytics office Edmund Chua said this poll was conducted as "we really wanted to see what comes to the top of people's minds when we talk about public safety".

CEO of AsiaOne Sean Ler added: “We decided to conduct a sentiment pulsing survey against random street polls so that we can share with our audience a more accurate and scientific analysis of public sentiments.

"For issues that concern or matter to our audience, we would like to be accurate and concise." 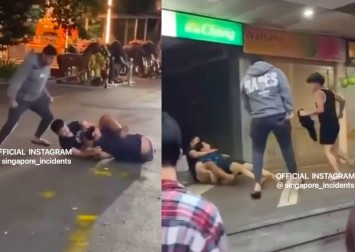 Although there has been a recent surge of violence in the news, the actual number of knife-related crimes has remained "relatively constant" over the past five years, the Minister of State for Home Affairs Desmond Tan said, according to a report by CNA earlier this month.

He added that the number of knife-related crimes involving murder, robbery, rioting and serious hurt averages about 150 cases annually.

However, despite these numbers, some respondents surveyed by AsiaOne remained concerned about the spate of incidents and whether the neighbourhood is really safe.

Out of the 1,995 polled, 141 of those who felt unsafe provided comments explaining their concerns in greater detail.

Some 20 per cent of these people felt crime rates had increased, while about 10 per cent had concerns about general crime in their neighbourhood.

"Now I would feel afraid when I go out," one respondent wrote. "Whenever I go out, I would think: I hope there are no murderers here!"

Aside from crime in the neighbourhood, some 12 per cent of them were concerned about the perceived lack of transport safety.

"So many traffic accidents," a respondent lamented. "Not enough punishment to deter the reckless drivers."

83 per cent of the complaints received regarding transport safety mentioned cyclists or PMD/PMAs.

However, a Singapore Police Force (SPF) report about the traffic situation in 2021 showed that the number of fatal accidents is in fact lower than they were pre-Covid-19.

Some respondents (39 per cent) in the survey also said that they prefer to have more police presence around their neighbourhood, with some suggesting more police patrols at night or increased surveillance.

They will be glad to know SPF was given additional powers as announced on Dec 30, 2021.

At the start of this year, SPF was able to "enhance [their] operational capabilities and readiness" to deal with crime.

The powers include, for instance, increased penalties for motorists who evade roadblocks and the ability for police officers to enter any place in case of "medical emergency" or "to protect persons from injury or death".

READ ALSO: 'Save me, my hand is gone': 9 men who fought off Beach Rd attacker receive awards