That's the vibe that South Korean star Ku Hye-sun is giving off in her recent Instagram updates. Last Sunday (Feb 2), she uploaded a selfie with the caption: "Perm. I'll be away soon."

A day later, the 35-year-old actress followed up with a similar photo, only this time, she dropped the bomb. She wrote: "I'm leaving for England. It's far. I'm alone. Flutter!" Reports say she will be studying language over there.

It's been a quiet few months since the bitter divorce scandal that Hye-sun and South Korean actor-model Ahn Jae-hyun were embroiled in.

ALSO READ: Not so 'happily ever after'? Ku Hye-sun and Ahn Jae-hyun reportedly quarrelled for 6 hours on the set of Newlyweds Diary

He also seems to be coping okay and moving forward. He wiped his Instagram account clean in October during the public feud but started posting again on Christmas Eve to wish his followers a merry Christmas. Recently, the celebrity also sported blonde locks and is casually hanging out with friends and snuggling with his cat.

The couple met on the set of drama Blood in 2015 and got married the following year.

Suddenly, in August last year, news of their divorce proceedings broke and it created quite the stir as both parties engaged in mudslinging and accusations. Jae-hyun, 32, was ready to let it go, but Hye-sun made it known that she wasn't going anywhere.

She accused Jae-Hyun of gossiping about her and talking to other women while he was drunk and even claimed that he was cheating on her in a series of text messages which were leaked. The most shocking revelation, however, was Hye-sun's claims that Jae-hyun didn't find her nipples sexy.

Hye-sun wrote in a statement on Instagram (which has been taken down): "When I asked him what I did wrong, he would say that I wasn't sexy. My husband told me that he wanted to divorce me because my nipples weren't sexy." 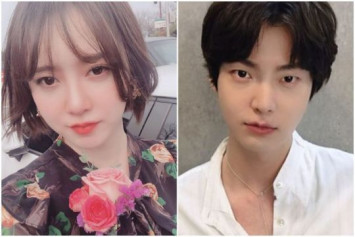 In return, Jae-hyun released a statement on Aug 21 accusing her of trespassing into his apartment while he was asleep to go through his phone and only telling "truths that benefit her". He also claimed that there was no infidelity on his part, writing, "I did my best as a husband in our married life, and I've never done anything shameful."

It's unclear whether the couple's divorce has been finalised, but according to an interview with Korean magazine Woman Sense, it seems that the proceedings are underway.

There seems to be a truce between both parties and for now, Hye-sun looks set to move on and is England-bound.

Guess the cold never bothered her anyway (after how he treated her).