One customer wrote about buying "economic noodles selling at [a] non-economical price" of $5.90, where one can "barely see [any] ingredients".

'Shrinkflation' is not just a buzzword these days, it is real and hitting us where it hurts most — our wallets.

While some US manufacturers and retailers have chosen to quietly cut down on the amount of product per unit rather than raise price tags, the same cannot be said for F&B business owners in Singapore.

With food prices on the increase, it seems some hawkers in Singapore are not just hiking prices but also resorting to skimping on portion sizes and ingredients in order to cut cost.

The result? A double whammy on customers' tummies and pockets.

Over on the Complaint Singapore Facebook group this week, several irate netizens have aired their grievances over hawker or food-court meals deemed expensive.

One customer wrote about buying "economic noodles selling at [a] non-economical price" of $5.90, where one can "barely see [any] ingredients".

Her post prompted another netizen to quip that the definition of "economic" has to be redefined.

Other grouses by diners include paying $6 for a bowl of soup containing two pieces of pork ribs, and a plate of fries for $8.

$8.00 for just the fries? You must be kidding me bro. Teck Whye Rasa Rasa you should do something about it.

One commenter on the post noted, however, that the pork ribs in the soup are premium loin ribs and not the regular spare ribs, which would otherwise cost $5 for four pieces of meat.

This didn't stop another netizen from commenting: "Everything goes up except pay."

Another recent post to the group by one Facebook user showed a plate of four dishes with no rice from a mixed rice stall that came up to $8.30.

"Wow that looks like just a plate of snacks, not worth it for the amount paid sia," wrote one commenter, while another noted that ordering dishes without rice tends to be more expensive.

It looks like we won't be hearing the end of such complaints anytime soon.

Just last month, a woman lamented about her $5.40 cai fan at a foodcourt in Outram Community Hospital. Her plate of rice contained a slice of pork chop and three vegetable dishes. 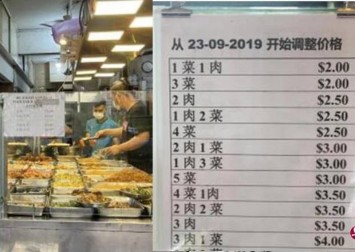 Her main grouse was over the $3.50 pork chop cost which was "the size of a [table]spoon". She added that while she doesn't mind the price, "the portion is really too little".

Others too, grumbled about how eating out and even ordering takeaways now have become more expensive.

On the other hand, there are some stall owners who have held their prices firm despite the rising cost of ingredients.

One such eatery is Goldhill Family Restaurant along Hougang Avenue 3, which is still selling 'cai fan' – one meat and one vegetable – at $2 for the past three years.